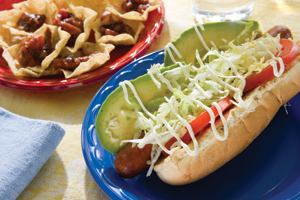 I grew up in the north – Poughkeepsie, N.Y., to be exact. So summer and grilling had a very short seasonal window, unlike here in the Lowcountry.  Up in the frozen north, we couldn’t wait for that first backyard barbecue when we pulled out the dusty old grill from the garage.  Now, my grill gets fired up pretty much all year round — I even use it to roast my Thanksgiving and Christmas turkeys (hey, it frees up the oven).

But certain foods still just scream out summer to me…cue a juicy, plump hot dog straight off the grill.  Back then, however, the sides and toppings were pretty much bog standard — relish, sauerkraut, onions, and of course the famous duo of ketchup and mustard.  There’s nothing wrong with the tried-and-true condiments of the past, but now with the culinary revolution that’s out there bombarding us on TV with a new cooking show every time you change the channel, even the mundane hot dog has not been left untouched.
Now there’re uncured organic “healthier” hotdogs in the supermarket, like Applegate Farms, but actually the good old Oscar Mayer Beef Franks stack up pretty well compared to other brands when you look at the labels.
We all know that our hotdog intake shouldn’t be anything like Joey Chestnut’s record 68 dogs in 10 minutes to win this year’s Nathan’s Fourth of July hot dog eating contest for the sixth time.  But, when you want to indulge, in moderation, in a hotdog, look for one with no more than 150 calories, less than 14 grams of fat (tops 6 grams of saturated) and keep the sodium level under 450 milligrams.
So, with all that in mind, I dressed up a few dogs.  Gave them a new look, made some a bit more healthy, threw in a few veggies, used salsa instead of ketchup, mixed up the toppings, and took a bit of inspiration from different countries to perk up these old pups.