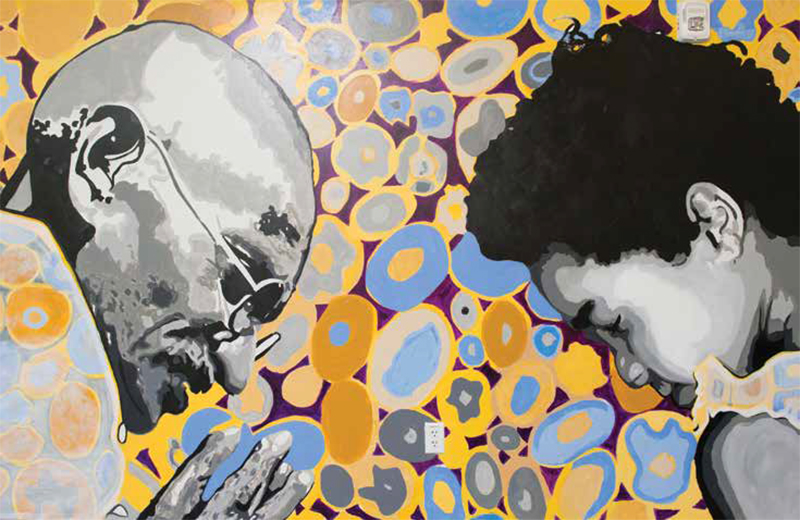 Everyone on Hilton Head Island has the chance to be an artist this year— thanks to a dynamic new public art series sponsored to the town to promote community engagement.

Art and culture are catalysts for civic engagement, and by participating in public art projects people build a stronger connection with where they live, said Jennifer McEwen, director of the Town of Hilton Head Island’s Office of Cultural Affairs.

“We encourage artists and novices alike to get creative,” McEwen said.

To celebrate the opening of the new Carmines Recreation Building at the Island Rec Center, local artist Lauren Andreu designed a mural honoring historic peacemakers. The mural that one wall of the center’s community room and at a paint-by-numbers style event in February, Lowcountry residents of all ages spent a Saturday painting the mural. 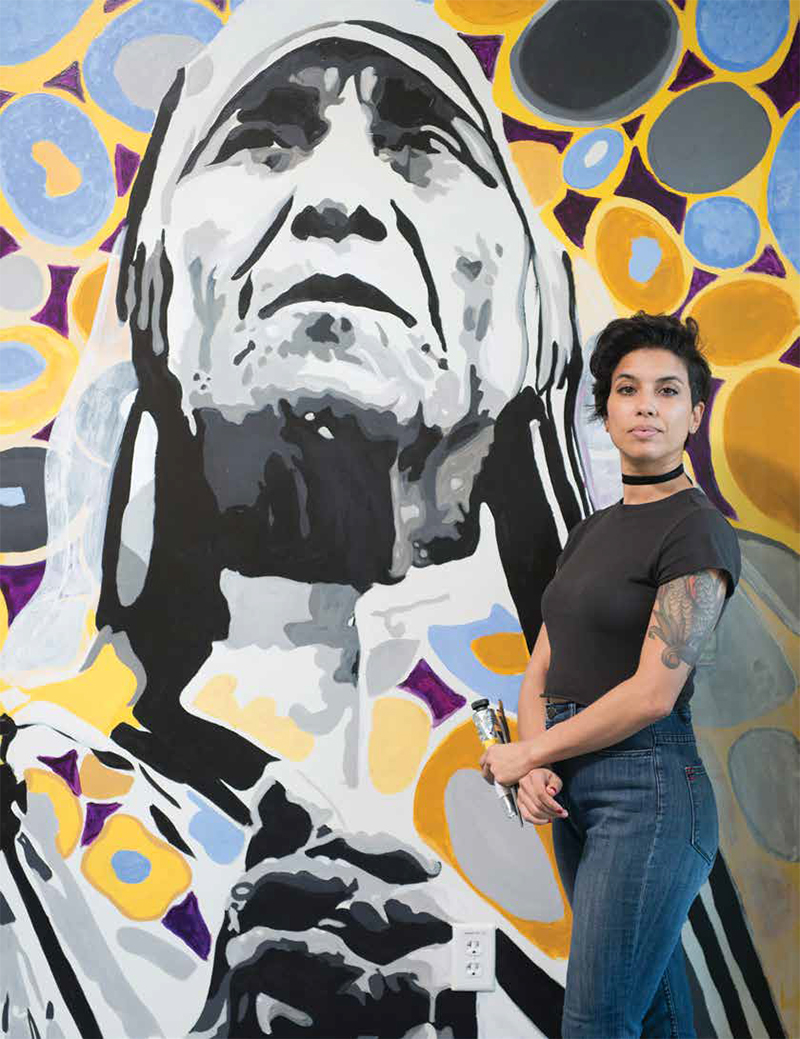 “I was amazed at how quickly it was finished,” Andreu said. “The support from people in our community was amazing.”

“I hope people will experience this mural and remember the legacy of peacemaking through images that convey the message,” she said. “Images speak louder than words. Art is the universal communicator and is accessible to everyone.”

Andreu has a master’s degree in social work from the University of South Carolina and has focused on community and social economic development. She is also a massage therapist and moved to the Lowcountry from Columbia after completing an AmeriCorps mural project in a high school there. Her artwork also is on display at Hilton Head’s Town Hall. 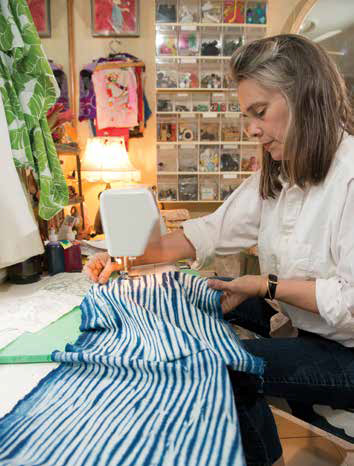 A second community art project is unfolding at the Island Rec Center this spring.  Sponsored by Community Foundation of the Lowcountry, local artist Stella-Lee Anderson designed a large-scale tapestry that weaves together ecology, history and art. The fiber arts project depicts endangered and extinct plant and animal life from the coastal waters of South Carolina.

Anderson designed two of the project’s three panels. The 5-by-8-foot panels feature the ocean and marsh; the center panel will be 2-by-8 and will feature 36 endangered species. The patchwork pieces of the center panel are being designed and created by members of the community at workshops directed by local artists, including events at Memory Matters and the after-school program at the Island Rec Center.

On March 11, local residents gathered to tye-dye fabric using indigo, a natural dye that was once an important part of South Carolina’s economy. Later in the month artist Hank Herring led a batik workshop for adults. The process uses wax to prevent dye from penetrating cloth, to make designs on fabric. The finished tapestry will be installed in the Rec Center’s foyer on June 1.

“This collaboration helps to bring the community together,” Anderson said. “My hope when I make art is to instill a sense of curiosity and wonder that will lead people to want to learn more.  I want people to come away being curious about our environment and our effect on it.”

Anderson has lived on Hilton Head for 12 years, moving from Eugene, Oregon, where she had a community art space. Her next community art offering will be a junk art workshop on April 19.

The third public art project planned for Hilton Head is set for November — though preparations already are underway. Participants have begun designing the large-scale paper lanterns that they will then carry in the street as part of a lantern parade. Led by Atlanta artist Chantelle Rytter, the event will celebrate the people, history and ecology of Hilton Head.

Rytter, who led a recent lantern-making community conversation at the University of South Carolina’s new hospitality campus on Hilton Head Island, said she was inspired by the community lantern parades of the British Isles and the striking large-scale light sculptures of Asia and Australia. This isn’t Rytter’s first lantern parade; she also is the founder of the Atlanta Beltline Lantern Parade. 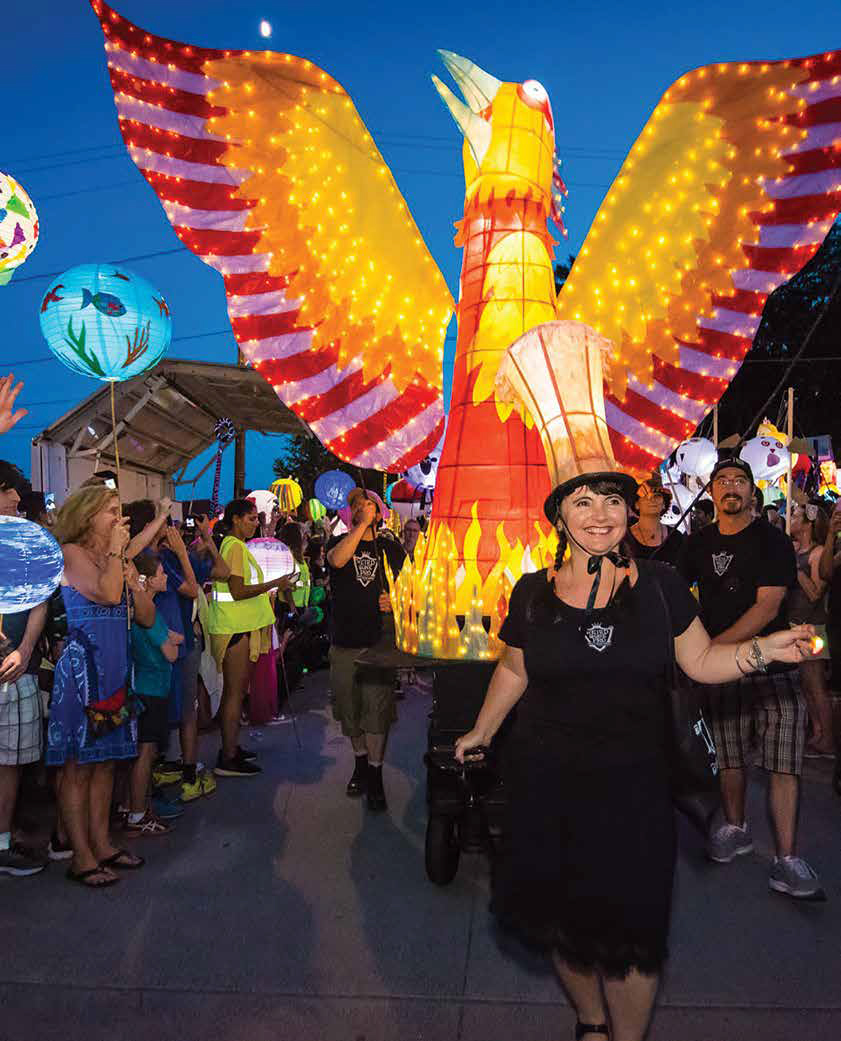 “I believe creative play is a gift that you give your community,” she said. “Holding up a light is a universal gesture of faith and support and a symbol of community around the world.”

Those interested in making lanterns for the parade will find tips on culturehhi.org, or they can purchase sea turtle lantern kits sold at the Coastal Discovery Museum. The museum and the Art League Academy also will be hosting lantern-making workshops in partnership with the Office of Cultural Affairs.

“The only requirement to march in the parade is that you have a lantern of some kind,” she said. “Art clubs, POAs, civic groups and just gangs of friends are encouraged to start making lanterns as early as they can.”

Rytter will hold a week of lantern-making workshops for interested groups during the last week of October or the first week of November. For more information or to request a workshop for your group, call 843-341-4703 or email McEwen at jennm@hiltonheadislandsc.gov.

ALL INVITED TO CREATE ART FROM JUNK

Artist Stella-Lee Anderson and author Miho Kinnas will hold a free junk art workshop from 1-4 p.m. April 19 at the Carmines Recreation Building at the Island Rec Center. The workshop is for all ages, but children must be accompanied and helped by adults. Junk and crafting supplies will be provided, but participants are encouraged to bring their own clean, unrecyclable trash — like CDs, DVDs, corks, straws, plastic utensils, bottle caps, ribbon, string, twist ties, soup cans, chopsticks, fabric scraps, old board game pieces, fruit mesh bags, etc.

For more information, go to www.culturehhi.org.