ST. ANDREW BY-THE-SEA’S FALL FESTIVAL IS PART OF A LONG TRADITION OF GIVING BACK. 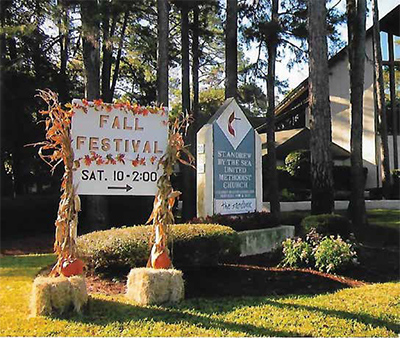 It’s a good time to turn 50, it seems: From the RBC Heritage golf tournament to Palmetto Dunes, many island institutions are marking the milestone. But one is celebrating a little bit more quietly, marking its half of a century with the same selfless drive to help others and enrich the community as it has exhibited for the past 50 years.

St. Andrew By-The-Sea United Methodist Church had been holding service at Planter’s Hall at the Old William Hilton Inn when Charles Fraser decided the congregation needed a home. He donated land on Pope Avenue with the condition that a church worth at least $50,000 be built within the first three years.

“It was an act of kindness,” said the church’s pastor, Rev. Neil M. Yongue Jr.

Hosting shrimp dinners, oyster roasts and even plane rides, the flock raised the money for the new church, breaking ground on March 7, 1971. The effort showed how well the congregation bands together, and its tight-knit bonds of fellowship.

“We are fortunate to have very active folks that believe in the ministry,” Yongue said. “We have a good congregation that is very loyal to the ministry of this church.”

One member of that congregation is Pastor Emeritus the Rev. Julius S. Scott Jr. A former executive director of higher education for the United Methodist Church (not to mention personal friend of Martin Luther King Jr.), Scott is a longtime member and devoted follower of the church. He has, in his own words, “seen a few churches,” and he is passionate about the work being done at St. Andrew By-The-Sea as he’s watched it grow — growth that’s “not only in size,” Scott said, “but in its importance and impact in its community. That’s evident in the fact we’ve grown to a new campus in Bluffton.”

As large as the church has become, it is still defined by that spirit of camaraderie and teamwork, first established when its members banded together to raise money for a church. For the past 40 years, the members have worked to mission trips and outreach programs and provide for the less fortunate through the church’s annual Fall Festival. One part rummage sale, one part community get-together, the festival raises money that goes right back to the community.

“It’s great watching folks work together and watching the joy that they’re a part of … something bigger then themselves,” Yongue said.