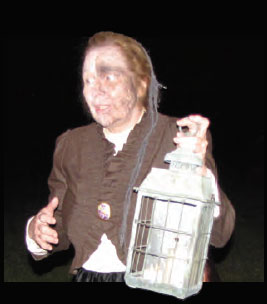 Paranormal stories about Hilton Head Island abound, but only the brave will dare to hear them in a cemetery at night. The nonprofit Heritage Library will bring to life early Hilton Head Island residents Lydia Davant, Andrew Baynard, Capt. Jack Stoney, Mary Kirk, Paulson Schwarzer and William Eddings Baynard. Witness the Hilton Head of the 18th and 19th centuries through their eyes as these costume characters recount chilling stories in the moss-draped cemetery on the corner of William Hilton Parkway and Mathews Drive. Hear ghost stories about Harbour Town Lighthouse, The Baynard Funeral Procession and the Blue Lady of Hilton Head Island.

Savannah is known for its ghostly residents. After all, it’s been dubbed the “Most Haunted City in America.” And many of these spirits can be found around other so-called spirits — in the city’s pubs and bars.

This two-hour, adults-only tour takes participants behind-the-scenes at some of the city’s oldest drinking establishments, offering exclusive entry into some of the most haunted spots in the lower historic district. Enjoy a casual stroll — less than a mile — that covers 300 years of history, ghosts and Tours depart at 7:15 p.m. nightly from Cool Savannah Tours & Gifts. Tickets are $35 for ages 21 and older and do not include the price of drinks at the pubs and bars visited on the tour.

For more information, call 912-231-3571 or go to www.coolsavannah.net/haunted-savannah-pub-tour.

TAKE A HAUNTED TOUR OF BEAUFORT

Ghouls and goblins will take over downtown Beaufort when the city’s Exchange Club of Beaufort hosts its 26th annual ghost tours. Beginning Oct. 12, brave souls can take a carriage ride or walking tour through the Historic District while listening to haunting tales of the area. Tours last about an hour and will be held Oct. 12-13, 19-21, 26-28, and 30. All proceeds benefit the Child Abuse Prevention Association of Beaufort County.

The Exchange Club draws its haunted tales from childhood stories shared by some of Beaufort’s oldest residents, bringing them to life with costumed storytellers. Don’t miss the home of the supposed oldest ghost in America, said to haunt Beaufort’s Castle, a 19th-century renovated estate located along the Beaufort River downtown. And tourgoers beware: Ghosts have been known to appear along the route.

Walking tours are $12 for all ages; carriage tours are $12 for children ages 3 to 11 and $22 for adults. All children must be accompanied by an adult. A pet- and stroller-friendly walking tour leaves each night at 7 pm. Reservations are strongly recommended and can be made by calling 843-524-4678 or going to www.capabeaufort.org.