Lance Little was still in high school when, sitting on the porch shooting the breeze, he came up with an idea that seemed far-fetched — a restaurant that cures world hunger. It was clever, but wasn’t it a bit naive? The fast-food giants were making billions, but the fry cooks came home smelling like cheap grease, earning minimum wage while the money funneled upwards. Meanwhile, even in first-world America, children were going hungry. Of course, this was high school, and Little wasn’t too concerned with the economics of the idea. Enrolled in Hilton Head Island High School’s ROTC program, he had plenty to keep him occupied, along with being an average teenager. But his idea to end world hunger would not be ignored, even as he grew up and moved on with his life.

After high school, Little enrolled in the Citadel with hopes of adventure around the world as part of the Navy’s most elite division. During sophomore year, he began training with active SEALs for boot camp the following summer. But one day, when leaving a Navy Special Warfare training session, his motorcycle was rear-ended by a truck travelling at 60 mph, shattering both his right leg and any hope of a military career. Discharged from the Navy and devastated, he was facing the likelihood that his leg would need to be amputated. But Little offered a challenge to his doctors: Though he didn’t have much money for expensive reconstructive surgery and rehabilitation, he wagered that if the doctors would save his leg, he would put in the painful hours of physical therapy and run the entire distance between his doctors’ offices in a year. Challenge accepted. The following year, Little woke early, showing up at his plastic surgeon’s office to give her a big hug before setting off with his dog on the 22-mile run to his orthopedist’s office. It was just a few miles shy of a marathon. As Little found himself at the brink of giving out just a short distance from the finish line, his longtime friend Josh Jettie — just back from a tour in Iraq — showed up to surprise him, giving Little the boost he needed to go the distance. Little showed a resilience that day that was to shape his budding character. 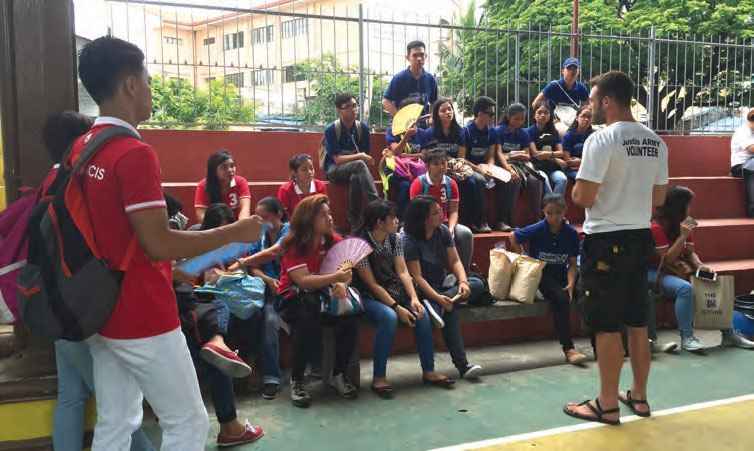 The accident cost Little more than his dream of joining the SEALs. Leaving the military meant leaving the Citadel. Little returned to Hilton Head to continue his recovery and rehabilitation, managing an event company and reframing his life’s purpose. One of the allures of becoming a Navy SEAL had been travelling to deal with challenges in exotic places, and Little decided that USC’s International Business program could meet that desire. He transferred to USC but dropped out after his grades dropped below A’s — the International Business program was one of the most competitive in the country. Returning to the island, he started a property management company and absolutely hated it.

“I was spending all this time doing something I didn’t like to buy things I didn’t need,” Little said. The grim business of collecting money and evicting families took a toll on his humanitarian sensibilities.

It was during these difficult years that Little returned again to the thought of his charity.

“It seemed like every time I got off the path, something happened that put me back,” he said. “Call it God or what you will, I’ve never experienced anything like it.”

If the accident was the catalyst that put him on the path to realizing his dream of ending world hunger, it took a trip to the Philippines to cement his vision. It was there he saw poverty in the begging hands of children who weren’t getting enough to eat.

While in the Philippines — a trip he had taken solely for the travel experience and to do a little soul searching — he met a woman who wanted to feed kids in a very impoverished area but didn’t have the money. When Little asked her how much she would need to feed 150 kids, she said it would take 1,000 pesos, or $20. To Little, this was a no brainer. He made a simple T-shirt that read “Fight Hunger with Hunger” and used his own money to fund the first official act of his charity. From vacation to vocation, days went from leisurely scuba diving trips to long hours spent connecting with people, fundraising, seeking out volunteers and feeding local children.

Returning to Hilton Head after Hurricane Matthew, Little took some time to reflect. Though he had long ago signed the paperwork to make his charity official, he had wavered. But his renewed faith inspired him to break any remaining shackles keeping him from his vision — the mental baggage, the sense of obligation to social status or the need for a lavish lifestyle.

“I quit drinking and smoking, I disconnected from social media and I got into solitude, almost a rebirthing of myself to step into this new person that I was supposed to become,” he said. Sleeping on his mother’s couch and using money he had earned himself, Little planned another trip to the Philippines. He could fit all his belongings into a suitcase, a duffel bag and a backpack. His sandals became his only pair of shoes.

At the beginning of February, Little once again landed in the Philippines — but this time with a vision: to start a brand of restaurants intended to feed local communities. Essentially, those who can afford to buy food there are supporting those for whom food is too expensive. In theory, the growing chain would avoid the usual flow of money to the top and instead keep it in local communities. But what Little will need now is proof his concept works. He’s given himself eight months to start a food stand at the local shopping mall whose profits will feed the children. By September, when his stay is over, it must run practically on its own. It’s no small feat.

The future is yet unwritten for Little, but he has turned a significant chapter in his book. He plans to live frugally, growing his brand and living off the pending success of his venture. However, unlike corporate CEOs, he plans to earn no more than he needs. Back on Hilton Head, he thinks the concept could blossom. He’s already partnered with local gym owner Scott Middleton of XP Fitness, which is donating 10 percent of new membership dues to help feed children. While the well-fed are burning off pounds, they’re also tipping the scale the other way, essentially giving pounds to hungry kids abroad.

“There’s absolutely no reason, if we have Burger King, Wendy’s, McDonalds, there’s no reason why there can’t be one restaurant where the money goes toward the kids instead of the owners and board of directors to buy jets and $1 million yachts,” Little said. “There can be at least one franchise, just one, for the kids. If you love people, just eat here once a week.”

Editor’s Note: In this series, we catch up with young Hilton Head Island and Bluffton natives who are now making their mark elsewhere. The article highlights their blossoming lives and how their hometown helped shape who they are today. To nominate a person, email editor@hiltonheadmonthly.com.