I always called him Tripp. I remember mornings at South Carolina Yacht Club’s summer sailing camp, putting together the boxy Optimists before launching them into the water. The effort of the work was worth it with the release of your boat into the water, yours alone, its one sail getting fat in the wind. Our shared childhood started at Hilton Head Preparatory Academy, trading Legos in the sandbox in a tight-knit trio: me, Prentice “Tripp” Brower and John DeZeeuw. But while my dad always had to pull me back to the water, it was hard to peel Tripp away, his skin growing ever tanner. When I migrated to public school, Tripp stayed at Prep, where he started its first sailing team.

While studying political science at College of Charleston, Brower worked on Carolina Girl, a 100-foot charter yacht. Summers found him back at the Yacht Club, taking on the role his older brother, Cameron, had before him, teaching the kids we once were. After college, he balanced his skill set with a trade rooted in hands and materials, apprenticing under master boat builder Ted Bullock just as he founded Barrier Island Boat Builders. This craft, rooted in centuries-old traditions that have scarcely changed, would prove vital to his vision. But developing a career as a master wooden boat craftsman proved less important in the small new company than his help managing its day-to-day realities. Brower stepped up as operations manager, manning the client relations helm and rigging together the website. 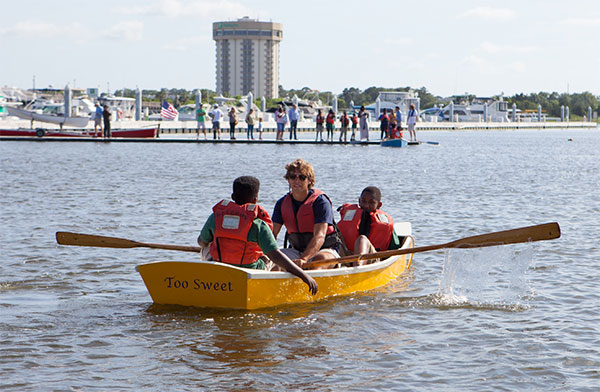 But in 2014, after two years immersed in boat-building culture, an opportunity walked into the boat yard. Matthew Milling had come by for regular maintenance on his schooner, Welcome, which regularly ferried tourists out of Shelter Cove for sightseeing and pirate sails. Milling had a nonprofit he struggled to get off the ground. Lowcountry Maritime Society was trying to expose kids to the water, and Milling, whose main career was too demanding, asked if Brower would take over. For his bachelor’s thesis, Brower had focused on community-supported agriculture; he was no stranger to ideas of community promotion and development. And his time with Barrier Island Boat Builders proved he could manage effectively. In addition, it gave him a deep ties to sea-minded people. A lifetime on the water led to this moment. He agreed, forming a board of directors that fall that would elect him executive director, igniting an organization that promises to bridge a dire gap between underprivileged kids and the water.

While retaining its original intention, Brower integrated the trade he knew so well, shaping the budding nonprofit around a format he saw among nonprofits elsewhere —using boat building to teach essential topics from math to local history. Throughout a semester cycle, kids from Title 1 schools, most of them minorities, build a vessel that becomes greater than the boat itself. The boat ferries students through the science, technology, engineering and math, or STEM, skills sorely lacking in American education. Brower is confident test scores among his afterschool students will rise, and it’s a bold initiative to reconnect youth who might otherwise never touch the water. 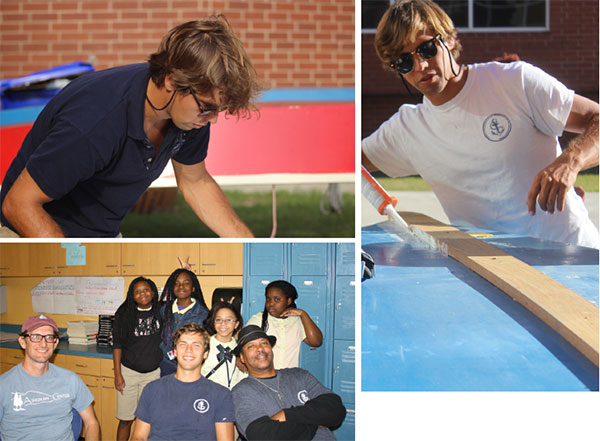 On a peninsula whose history is so rooted to the water and whose African-American culture was so shaped by it, access to that water has grown scarce. The cruise and freight industry have essentially dominated one half of the Charleston peninsula’s waterfront, and private development steadily chips away at public access, leaving residents and visitors alike only a pleasant view from the Battery. Left of the Mosquito Fleet, a tight-knit black fishing fleet that stocked Charleston’s seafood markets for centuries, are the mere wooden pylons of its former dock. Unmarked and easy to miss, they sit between the port and luxury apartments.

Lowcountry Maritime Society is now 2 years old. It has started a New Mosquito Fleet to ensure the tale doesn’t wash away. Brower is finally free from instructing classes and can take the upper deck. That means getting the vital funding needed for such a project, collecting more data to assure investors, and building important partnerships. The nonprofit group hopes to expand along the Carolina waterways, with Hilton Head Island in scope. When it’s finally ready for launch day, a student’s handmade wooden rowing skiff has become more than a boat. Time and work have shaped wood into vessel. Along the way, Charleston’s next generation have learned crucial STEM skills, honored their culture’s contributions to maritime culture, and taken what may be their first dip into the Atlantic.

Editor’s Note: In this new column, Hilton Head Island native Marco Frey catches up with young Hilton Head Island and Bluffton natives who are now making their mark elsewhere. The column highlights their blossoming lives and how their hometown helped shape who they are today. To nominate a person, email editor@hiltonheadmonthly.com.