The coronavirus pandemic hasn’t slowed Sallie Ann Robinson down. Those who know her aren’t sure that anything could.

With a tour company on Daufuskie Island, three Gullah cookbooks, a volume on Daufuskie history with Jenny Hersch and whispers of a Netflix special in the works, she doesn’t seem to have time to sleep. But she’s a woman on a mission, one who seems fueled by the efforts of her ancestors to treasure their remote island. 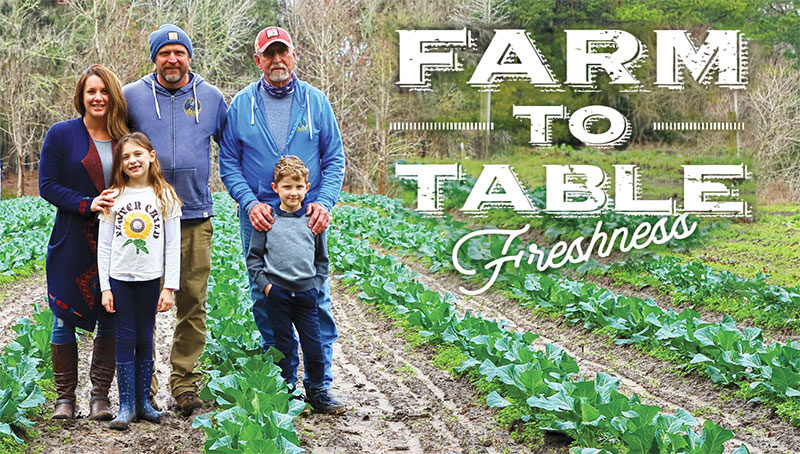 John Cahill and his son Robbie, the produce and palette architects behind Cahill’s Market and Chicken Kitchen, know that when it comes to the successes of their now 17-year-old business, they owe all blessings to the land.

John’s grandmother bought the 200-acre parcel off May River Road in Bluffton in 1918 for $10,000; money obtained as the life insurance beneficiary after her brother died in World War I.

SHOULD YOUR BUSINESS CONSIDER A PHILANTHROPY PROGRAM?

Some companies proudly publicize their charitable programs. It’s a great public relations effort, but does a business that includes philanthropy as part of its corporate culture reap any benefits?

According to a 2018 study by Mintel, a London-based market research firm, 73 percent of Americans say that a company’s charitable giving influences their purchasing decisions. In that same study, 84 percent believe it’s important for companies to support charitable causes, and 65 percent think it’s a company’s responsibility to give back.

WHY PRO VIDEO CAN BOOST YOUR BUSINESS

It’s said that a picture is worth a thousand words. If that’s the case, then a good cinematic video is worth 1,440,000 words a minute. Twenty-four frames per second means more communication, more storytelling and a more complete picture of what you and your business have to offer.

ESTABLISH YOUR PRIORITIES IN THE NEW YEAR

As investment managers, we believe the purpose of investing is to expand what is possible financially so that you can align your life with what matters most to you. Therefore, the first step to developing a successful investment strategy is to get greater clarity on your life priorities. Once your priorities are clear, then you can create a financial plan and an investment strategy to bring your priorities to life. The beginning of a new year is a great time to sort out your priorities  – especially a new year that holds great promise for seeing the end of a pandemic and a return to life as we once knew it.

South Carolina’s newest “hotspot” — a 1,000-acre tract drawing international attention from as far away as Japan — is about an hour’s drive from Hilton Head.

In rural Early Branch, a few miles from I-95 in Hampton County, futuristic-minded farmers, scientists, techies, environmentalists and government leaders are cooking up the farm of the tomorrow.

They intend to deliver a farm “under glass” that will combine greenhouses, processing, packing and distribution for an array of products — from peppers to pesto.

The results, they predict, will be thousands of jobs, increased market opportunities for the state’s traditional farmers, and enhanced food security for America’s East Coast.

The project’s ripple effect is expected to stir economic development along the I-95 corridor through Jasper and Beaufort counties to the Port of Savannah.

Economic development pros in the Lowcountry and Columbia say the project – the Agricultural Technology Campus — is a vital part of an expanding mosaic of technology, manufacturing, agriculture, life sciences, logistics, warehousing and shipping.

“The sheer size of this project in terms of capital investment, wages and job creation will have a game-changing impact on this entire region, and the project is already attracting interest from other agribusiness companies engaged in both research and development,” said Danny Black, president and chief executive of the Barnwell-based Southern Carolina Regional Development Alliance, serving the counties of Beaufort, Jasper, Hampton, Allendale, Bamberg, Colleton and Barnwell.

The project is a target of interest among farming, engineering and technology companies in the U.S., Europe and Japan, said Kay Maxwell, vice-president of marketing for the Alliance.

SCORE SC Lowcountry is a small business’ resource dream, and for 31 years it has successfully connected volunteer mentors to clients with an impressive outreach model.

SCORE was founded in 1964 and established locally in 1989. Nationally, 2020 saw more than 140,000 business clients receive assistance from more than 11,000 mentors. The Lowcountry SCORE chapter is one of 250 nationwide, with 45 active volunteer mentors serving Beaufort, Colleton, Jasper and Hampton counties. The nonprofit was named 2019’s chapter of the year for the small business market.