“It was spring break time of year, with wonderful, beautiful warm weather everywhere except the beaches — it was 85 in the parking lot, but on the beach, you needed a little jacket,” he recalls with a chuckle. “But it’s just amazing how much beach there is. It’s just a beautiful place.”

The island is one of the top vacation destinations on the eastern seaboard, which is one reason Breon’s Portland, Oregon-based company, Vacasa, the largest vacation rental management company in the United States, acquired Resort Rentals of Hilton Head in 2017. 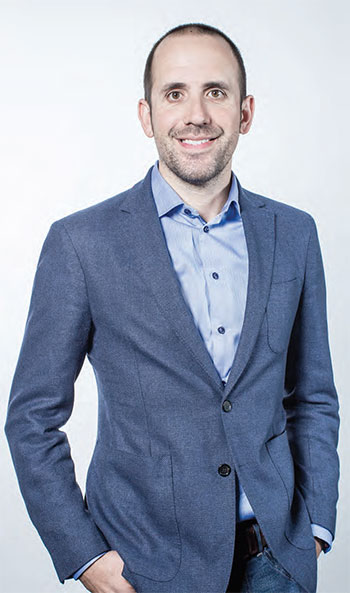 “It’s a core market,” says Breon, 40. “When people think of vacation areas, it definitely ranks as a top destination.”

Gerard Mahieu, founder of Resort Rentals of Hilton Head, also did his part to bring Vacasa into the Hilton Head market.

I LOVE STAYING AT A VACATION RENTAL, HAVING A KITCHEN AND A LIVING ROOM WHERE YOU CAN GATHER WITH FRIENDS AND FAMILY.
– ERIC BREON

Breon started Vacasa in 2009 after he and his wife, Alia, became caretakers of a 480-square-foot cabin on the Oregon coast, built by her family in 1898. Dissatisfied with the marketing reach and income projected by local rental management companies, the couple decided to manage the cabin on their own and grossed six times more than the expectations of local companies.

“As a consumer, I love staying at a vacation rental, having a kitchen and a living room where you can gather with friends and family,” Breon says. “But they were difficult to book, and VRBO was unsophisticated. We wanted to make it easier for the consumer.”

“But we quickly realized that if we were taking bookings, we needed to be able to deliver on guest expectations,” Breon says. So Vacasa became a full-service rental management company.

The company started small, branching out from its Portland-area hub to the Oregon coast and nearby Mount Hood. Just nine years later, Vacasa manages properties in 23 states and 16 countries, including Costa Rica, Chile, Spain and Italy. And with more than 10,000 properties under its wing, it is now the largest vacation-rental management company in the United States. In October 2017, the privately held company raised $103.5 million in its second round of funding, the largest ever in the vacation-rental sector.

Vacasa offers advantages for guests and owners alike, from its online 3-D properties tours to 24/7 support and the ability to list its properties on multiple websites — not just its own, but also VRBO, HomeAway, Booking.com and Airbnb.

“That means the vacation home you book through Airbnb or VRBO might very well be managed by Vacasa,” Breon told Forbes in April.

On Hilton Head, as elsewhere, Vacasa has made a point of relying on and trusting local expertise. Mahieu, for example, is still on board, and Vacasa kept all of the Resort Rentals employees. The company has also begun experimenting with Mahieu’s innovative use of cash cards to attract clientele: Rather than join the race to the bottom on pricing, the company provides pre-paid cards to guests, good for a limited time at local businesses.

“That’s something we have been experimenting with elsewhere,” Breon says. “That’s one of the cool things about this: coming across great ideas that different people are executing on, and seeing if it makes sense to share those ideas across our markets.”

Breon has seen a good deal more of Hilton Head since Vacasa entered the market. He gives much of the credit for the acquisition of Resort Rentals to the company’s lead negotiator, Sandra Brahn. Like Mahieu, a native of Paris, Brahn speaks French.

“It was a pretty long process, and it was a big decision for (Mahieu) to sell the company,” Breon says.

Beyond providing the best service to both owners and guests on Hilton Head, Vacasa is partnering with local real estate agents in the buying and selling of properties.

“We want to be there to help them, to find which house best meet their needs,” he says. “That’s going to be a big focus for us over the coming year.”

And, Breon says, he expects Vacasa to continue growing.

“Where do we want to be? The short answer is, everywhere,” he says. “If there are vacation home, and a need for management, we want to fill up the map. The more markets we cover, the better for homeowners and the better for guests.”