ENTREPRENEUR BILL WINANS BUILT HIS EMPIRE ONE OUTRAGEOUS PARTY AT A TIME.

We’ve all been there.

You want to throw an absolutely epic party for a few hundred of your closest friends that will include, but not be limited to: a live pirate ship, a complete sports bar fabricated onsite, go-kart races, Cirque du Soleil-style acrobatics and Hollywood-quality set pieces. And possibly a live-action samurai stunt show.

But where are you going to find all of that? 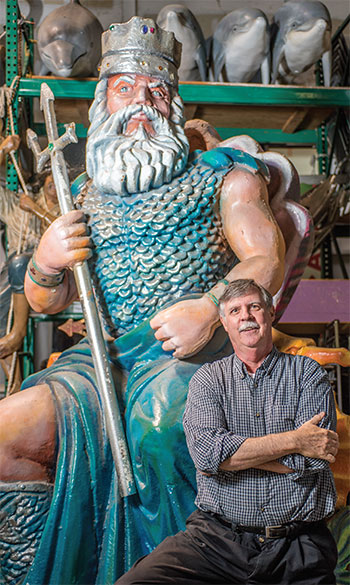 Turns out, it’s closer than you think. Just look for the pirate standing guard over a stretch of sidewalk just next to Northridge Theater. That’s where, among the loosely organized hodgepodge of rental furniture, movie props, statuary and free-standing 3-D art, you’ll find Bill Winans, the lead architect of Meeting Dynamics, an unlikely empire built around making the impossible possible.

“We like to answer any request with, ‘The answer is yes. What’s the question?’” said Winans, perched on a chair flanked by a ring of Roman-style columns set atop a portable dance floor at Art & Oddities. The store, just one part of the Meeting Dynamics empire, overflows with bric-a-brac, key pieces in some lavish party or another. And it literally overflows: what doesn’t fit in the store is housed at a massive facility back in the industrial corridor of Enterprise Lane — currently home to an enormous fake volcano used for a corporate party, as well as a grove of fake mangroves that had been used to convert a Savannah State University swimming pool into a swamp for a movie set).

It’s hard to wrap your head around the many arms and legs of Winan’s enterprise, but the gist of Meeting Dynamics is basically answering requests with a yes. The company offers a massive catalogue of furniture to rent for parties and weddings, as well as larger events such as the RBC Heritage Presented by Boeing. But the real magic is in the company’s more eclectic party planning for corporate events and sets for films, where the need is for scenery and experiences that amaze.

Like, for example, the time Winans planted an airplane in the swimming pool at The Westin Hilton Head Island Resort & Spa for a safari party. “I was actually able to find one that had been used for smuggling drugs, but had crashed and was pretty burnt up,” said Winans. The plane was just part of it, though. The plan called for a live actor to be stranded on the plane in the pool, surrounded by hungry alligators. For the record, if you ask The Westin very nicely , its staff will let you put a plane in the pool. But you can’t use live alligators.

“We had a scuba diver operating this 9-foot alligator,” Winans said. “The alligator would swim up, the actor would knock him on the head with a rifle, and it would sink back down again. Meanwhile, the party’s going on. There was a band, guests were eating and everyone was having fun.”

In addition to creating the perfect backdrops for lavish parties, Meeting Dynamics serves as a prop house and a destination management company for local tour operators. Its jack-of-all-trades mentality has propelled Winans through a career in hospitality that took him from Hilton Head Island to Chicago to Athens, Greece, and all points in between. 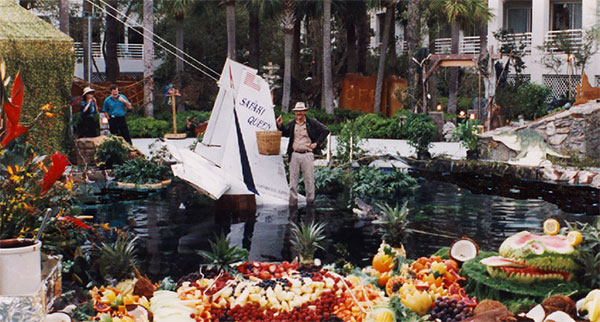 “My first job was at a New Orleans Marriott. Everyone wanted a big Mardi Gras ball, and that’s where I got hooked,” he said. “We would hire crews to come in and throw beads … we had the food trucks brought right up the elevator and parked them in the ballroom, and we’d hire Preservation Hall Jazz Bands-type bands.”

That led to gangster-themed parties during his tenure at the Marriott’s Lincolnshire Resort in Chicago, “Gone With the Wind” parties in Atlanta, Greek God parties in Athens and the like.

“I was hiring these scenery companies and thinking, ‘I can do better than this,’” he said.

Looking around at the mind-boggling array of eclectic ornamentation and décor at Art & Oddities, and trying to picture the parties each piece would go with, it’s safe to say he was right.

So when you’re ready to throw that insane party of your dreams, direct any questions to meetingdynamics.com. The answer to all of them will be yes.