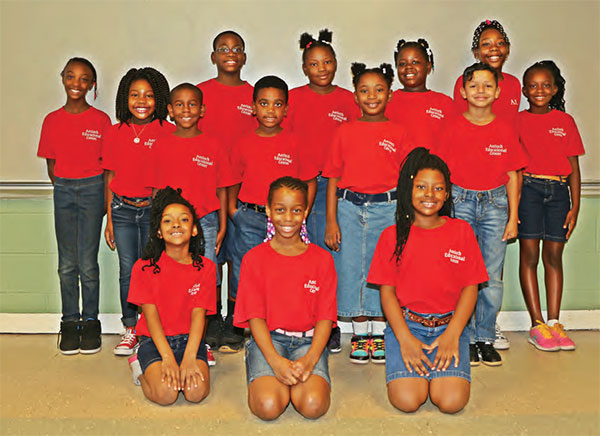 Jackie O’Bannon can’t help but overflow with joy when she thinks about her 14 “babies.”

The second- and third-graders who make up the 2-year-old  robotics program in poverty-stricken Jasper County leave her chuckling and smiling as she watches their steady progress from academic struggle to success.

“You can’t help but love them,” says O’Bannon, the executive director of the Antioch Educational Center in Ridgeland. “They have melted my heart.”

O’Bannon designed the center’s Scholars Program in 2012 to serve Jasper County elementary students after school and during the summer. The program, which began in 2014, is designed to teach kids robotic science, with the goal of keeping them in the program through their senior year and ready to head to college after high school graduation. Much of the funding for the program comes from an anonymous donor on Hilton Head Island.

The robotics classes were originally scheduled to start during the students’ first-grade year, but O’Bannon and the other organizers quickly realized that wouldn’t work. The children were so far behind in reading and math that intensive tutoring was needed before they could even begin learning the technical knowledge and other skills needed for robotics competitions.

So the center hired math and reading instructors to help the students after school for three hours a day. O’Bannon spends the first hour of each session teaching public speaking and helping with any social problems the students may have. The group meets each Saturday during the summer, and one Saturday a month, they take a field trip.

Now, after their second year in the program, shy children are standing up in front of their classes to make presentations. Students who had fallen behind in reading and math are now exceeding their grade levels. And some have even moved into gifted classes at school.

With such improvement, the first batch of students is ready to start learning how to make robotic devices. The excitement that has been building for two years among the children will now have a chance to come out.

“He’s very excited to know what they’re going to do,” says Antoinette Heyward of her 8-year-old son, Brandon Brantley. “He’s talking about drones. His imagination is all over the place.”

That excitement about learning is what program leaders hope will continue throughout the students’ academic careers.

To that end, each of the members of the committee that oversees the program serves as mentors to the students. And before students can be chosen for the program, their parents must attend a 14-week parenting class conducted by Hope Haven of the Lowcountry. The parents must also attend monthly meetings.

To Sharone Orr, mother of two 8-year-old daughters in the program, all of the parental involvement has been worth it.

Her daughter Janiah had been struggling with reading, but now she’s ahead of her grade level and won a writing award. Orr’s daughter Hazel Jeffcoat also loves to write and is heading into third grade at a fourth-grade reading level.

Both girls have gained confidence from the instruction in public speaking, she says.

“They love it,” Orr says of the Scholars Program. “They love their new friends. … They just have so much fun.”

As the rising third-graders begin the robotics portion of the program, a group of second-graders is coming up through the ranks. A new batch of six first-graders will join in the fall. In August, the Antioch center will have a new building of its own, thanks to funding from the Community Foundation of the Lowcountry.

But for O’Bannon, it’s all about her “babies” and watching them emerge from their shells and have the chance to succeed despite difficult circumstances.

“All of our ‘babies’ in the Scholars Program are very, very special,” she says. “I wished people could see the growth in these students that I see on a daily basis.”