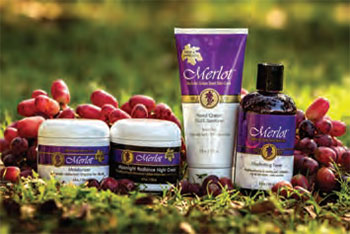 The answer he came up with 15 years ago in his Texas kitchen has become a multimillion-dollar line of skincare products sold in 8,000 Walgreens stores across the country, as well as other retailers overseas. Beckley, who moved to Hilton Head Island last year with his wife, Michele, says his reason for success is simple.

“There was a demand for it,” he says. “You can sell something one time, but to get it repeated is what you want. People buy these products over and over. In fact, we have a 96 percent loyalty rate, which is just outstanding.” 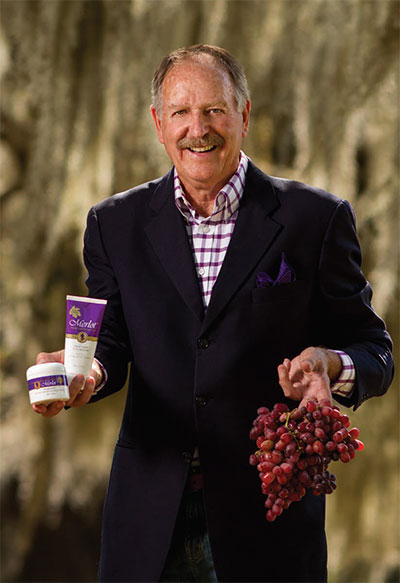 Beckley, or “Dr. Grapes” as he’s sometimes called, knows a thing or two about product demand. Before launching the Merlot skin care line, he released several other products over the years, including Kolor Key, the first car wax in colors; Super Shine, an all-purpose household cleaner; Secret Shine, a different kind of car wax; License Lock, which locked a license plate to a vehicle; and Weed Wand, a direct herbicide application tool.

But none of them were as big as Merlot Skin Care.

Though Beckley was sure about his product from the get-go, it took a boost from the media to kick-start the demand for his day cream, night cream and eye cream.

“I knew five managers in Walgreens stores in El Paso, so I asked if I could put this new product out in their stores. They all said, ‘Ok, but if it doesn’t sell, you’ve got to come and get it.’ Thirty days went by, and they all called and said ‘The product’s not selling, come pick it up.’ My heart was broken,” he says. “But the next night, the local TV station had filmed a feature on me and it ran. By Monday morning, they all called again and asked to get it back, said demand was through the roof.”

The seeds are harvested from Napa Valley grapes, and the product line is created in a manufacturing plant in Dallas and shipped across the country and overseas. Since its original launch, Beckley has spent years developing new products and becoming immersed in the cosmetics industry. He served on the advisory board for the Health and Beauty America (HBA) conference, one of the largest events in the cosmetics and personal care industry, and earned the Vendor of the Year Award from Walgreens in 2008.

The business is truly a family affair; Michele, as vice president of operations, manages international accounts — the line is sold in China, Vietnam and Japan — and oversees customer care. Their daughter Nicole is director of marketing and media, and their son Drew handles logistics for the company.

WAYNE BECKLEY’S 5 TIPS TO BEING A SUCCESSFUL ENTREPRENEUR

“To be successful in business, you have to surround yourself with good people,” Beckley says. “In my case, my wife and son and daughter are not only my family but they are good at what they do.”

Never one to rest on his laurels, Beckley is getting ready to launch a brand new skin care line this month. Called MV6, he says he’s developed the first skin care line featuring six vitamins. “There are some companies that have one or two vitamins in their products, but this has six. And they’re all so essential,” he says. “People take multivitamins, but research has shown that just by taking it, the vitamins don’t get out to the outer layers of your skin.”

MV6 will include a day cream, a night cream and a serum, but it won’t be available at Walgreens; he’s hoping to market the line through spas and dermatologists’ offices.

But if that doesn’t work, rest assured he’ll come up with a new idea.

“Maybe it’s just a God-given ability, but there’s not a day that goes by where I don’t have two or three ideas. I can walk into any store and see what’s out there and wonder why there’s not something different,” he says. “That’s good and bad — because I have trouble sleeping at night.”