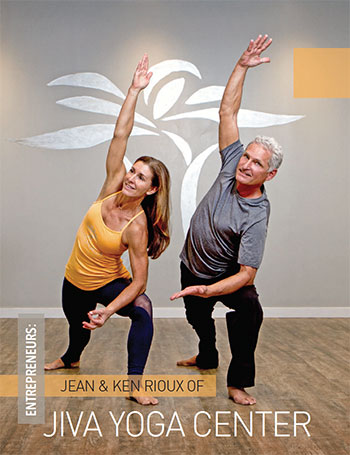 What began as a side service for clients at her Island Massage studio in 2001 grew so steadily, she eventually changed the name to Island Massage and Yoga for a time, before dropping the “Massage” entirely and opening Jiva Yoga Center on William Hilton Parkway, just off Sea Pines Circle. These days she is, quite literally, living her dream.

Today, there is a second location on S.C. 46 in Bluffton, and together the two studios employ 22 instructors who serve about 120 students a day. “Up to 3,000 people a month come through our doors,” says Rioux, whose husband, Ken, dropped his career in telecommunications in 2009 to join the family business. Also a certified yoga instructor, Ken leads private paddleboard tours and stand-up paddleboard yoga on Lowcountry waterways.

It’s the first time their careers have collided since the day they met back in the late 1980s. “I was a firefighter on Hilton Head and he worked for the water department (in Sea Pines),” Jean says. The two moved away from the island in 1990, bouncing from Portland, Oregon, to San Diego, then to Salt Lake City and Cleveland, all for Ken’s career in the telecommunications field. 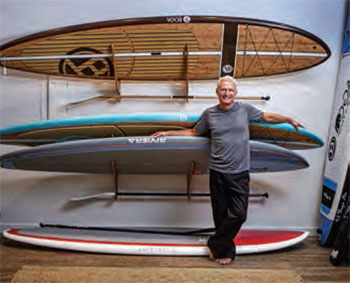 When the opportunity arose for him to take a job on Hilton Head in 2000, the couple jumped at the chance to move back to warmer climes. That’s when Jean, who had swapped her firefighter gear for a massage therapy table, opened her studio.

One of her massage therapy instructors also had been a yoga instructor and had piqued Jean’s interest in the practice. Jean believed in the power of yoga strongly enough to go through training herself in order to become an instructor.

“Yoga connects people to the present moment. There’s so much in today’s world that takes us away from ourselves, and yoga is a place to pause and feel connected to my breath, myself,” Jean says. “And then I’ll be connected to my friends and family in a really simple way… I wanted to teach that to my clients.”

The growth of the business was organic, Jean says, and was helped along by her sister-in-law, Vicki Rioux Rickard. Rickard, Ken’s sister, was the first instructor Jean brought into her budding business; she now leads yoga teacher training and advanced teacher training in addition to regular classes.

The center also offers special workshops, yoga on the beach, and community yoga classes as fundraisers for local charities.

“We also do a lot of yoga philosophy training workshops for people to learn the philosophical end of yoga practice,” Jean says. 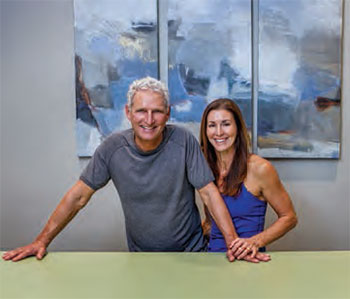 For the stand-up paddleboard yoga sessions, Jiva Yoga partners with H2O Sports in the spring and summer to offer two to four classes a week on the water.

“It is a lot of fun, visitors love it,” says Jean, who also meets plenty of tourists on the beach for yoga sessions. The fact that yoga is the type of exercise “yogis” are anxious to continue even while on vacation speaks to the kind of inner change and lifestyle the activity promotes, Jean says.

“Something amazing happens inside, a special energy, a feeling,” she says. “And people want to keep going deeper and exploring that more, and they see how it affects the rest of their life, how it affects stress, their relationships. It’s amazing.”