Showing family is more than just a name

There’s a quiet transition going on at Forsythe Jewelers at The Shops at Sea Pines Center. On July 1, Debbie Forsythe Berling will officially ride off into the sunset after building the business on the island for the past 34 years.

On the surface, this could be a monumental shift. The family business is going to be owned by someone not named Forsythe for the first time since Debbie’s grandparents opened their first store in Pittsford, New York, in 1927.

But according to Berling and new owner Andrea Bragg, the key word here is “family.” With the staff that both have spent a combined half-century building, that idea goes way beyond bloodlines.

“I am so thrilled that Andrea is taking over the business,” Berling said from the airport as she headed out on a long-overdue vacation to the Grand Cayman. Berling and Bragg have traveled the world to meet with designers and keep the shop’s offerings on-trend with what customers are longing to wear. Now, Berling gets to see the world with a leisurely view. 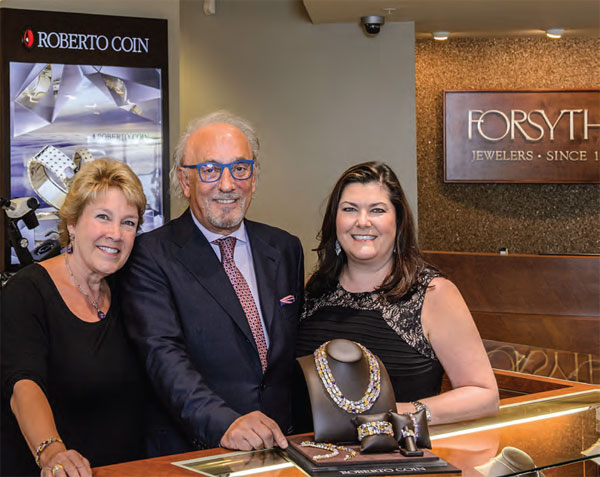 “Andrea has been training for this for years, so it’s a perfect win-win,” Berling said. “We’ve been planning this transition for years to make sure it was seamless. Customers won’t see me, but they’re getting a world-class team we’ve spent years building.”

Over the past 35 years, Berling has gone from a self-described rebellious and reckless young woman to a worldly business owner who has learned that creating a team solely focused on building relationships with customers who become friends is what has made being a Forsythe so special.

“Every year as a youngster, I hinted I might leave Hilton Head, and my parents got me involved, got me hooked,” Berling said.

With a diamond-buying trip to Antwerp, a gem conclave in Hawaii, a gemology degree and the chance to hold an enormous D flawless diamond in New York City, her parents showed her she could see the world and still build a wonderful life on the island.

Berling married for the first time to Jens Martin 18 years ago, and now at 62, she looks forward to visiting her three grandkids in Jens’ homeland of Norway.

As for Bragg, she started as a part-time sales associate with no jewelry experience 14 years ago and has learned every facet of the business studying under Berling.

“I felt very early on that between the business and the customers, this is what I wanted to do for a long time, and Debbie has been an incredible mentor and fostered that dream every step of the way,” Bragg said. “I’ve always treated this like it was my own business and the biggest compliment people have paid me through the years is asking, ‘Is this your store?’ Now I get to say, ‘Yes, it officially is.’”

Berling is leaving on a high note, as the business is coming off its best sales year ever. She said it’s a testament to the staff’s tireless efforts, both past and present.

“My best lesson through the year is never go it alone. I’ve been blessed to surround myself with a team of people better than me and I’ve always asked for help,” she said. “The staff, the customers, they are ‘Forsythe family.’ And Andrea has been so key in building that. I can’t think of anyone better to steward the values that my parents and grandparents have than Andrea. She’s passionate about service, energetic, loves fashion and is smart, kind and creative.”

Bragg said it will be business as usual moving forward. The name won’t change, and there will be the same focus on customer service and building a next generation of family on the island.

“Debbie and I have similar hearts and morals, so we’re just going to keep focused on offering the top designers, the highest quality gems and a second-to-none friendliness and customer focus,” she said.

Bragg also hopes to put her family imprint on the business even further with the support of her husband, Sea Pines director of golf Ray Bragg.

Her daughter Abbey, a sophomore in college, has worked at the store during holidays and will learn the business more this summer as a sales assistant. And her high school-age daughter Julia will also help from time to time.

“It’s such a blessing to have a chance to create an extended Forsythe family. It’s truly a dream coming true,” Bragg said.

“Every day, we are invited to share in joyful celebrations with our customers and friends,” she said. “That’s what I’ll miss the most, the biggest blessing through the years. But knowing Andrea will continue that legacy, I’m going to enjoy the fruits of the last 35 years and can’t wait to see what’s next for both of us.”