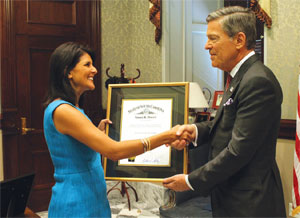 South Carolina Gov. Nikki Haley presented Steve Tanger with the Order of the Palmetto on Aug. 19, the highest civilian honor the state can give.

“This award is in recognition of his extraordinary work and dedication to the citizens of our state,” Haley proclaimed.

Tanger Factory Outlets owns and operates five shopping centers in South Carolina: two locally, two in Myrtle Beach and one in Charleston. The centers have created an estimated 6,000 jobs and approximately $246 million in retail sales tax to the state.

The Order of the Palmetto was first awarded in 1971 to recognize a person’s lifetime achievements and contributions to the state of South Carolina. Awardees include singer James Brown, author Pat Conroy and rock band Hootie & the Blowfish.

Before accepting the award in Columbia, Tanger flew into Hilton Head Island Airport to celebrate with team members at Tanger I. He took a few minutes to speak with Hilton Head Monthly about the award, his love of the Carolina coast and how his company shined through the recession.

Hilton Head Monthly: The Palmetto Award is the highest civilian honor awarded by the governor of South Carolina. How do you feel about receiving it?

Steve Tanger: I’m very flattered. I accept it on behalf of the colleagues we have and the 40,000 people that work in the Tanger centers every day. Even though my name may be on it, it’s an award given to everybody that works for our company.

HHM: You have five shopping centers here in South Carolina. What makes our state so attractive to your company?

ST: I like the coastline. I think that people want to go to the beach and they like the good weather. The South Carolina coastline is situated halfway between the New York metropolitan market and the Florida market. I think long-term, this is going to be a terrific area.

HHM: We live in a very beautiful area but there isn’t much industry. You employ a large portion of the workforce here. Do you take any pride in that?

HHM: While many companies were struggling during the recent economic crisis, your company was posting record profits. What do you attribute that to?

ST: The business model the outlet industry is based upon is simple and elegant. It’s brand names selling direct to the consumer. You cut out the middle man. In good times, people liked a bargain. In tough times like these, they need a bargain. We do well in most economic cycles. When the great recession hit four or five years ago, we were prepared for it because we had kept our balance sheet as a fortress. Our debt is low and we were able to avoid a lot of the issues that over-leveraged companies faced. They couldn’t afford the debt service and they started laying people off. We were fortunate and never had that issue. We now have 34 consecutive quarters, 8 1/2 years, of net operating income growth. We’re very happy with that.

HHM: How has e-commerce affected your growth?

ST: E-commerce takes disposable dollars out of the system. It has affected the purchase of consumer electronics, consumer hardware and other fair traded items — items that are commodities. You can find them at the best price on the Internet. Items that are sized and colored are difficult. It is difficult to make a profit selling apparel and shoes on the internet. People still like to see those items in person and try them on before buying them.

HHM: Your company does have a strong web and social media presence with online coupons, the Tanger Club the Tanger app and more. How else has Tanger embraced technology?

ST: We were the first real estate developer to provide free Wi-Fi at every one of our shopping centers. That seems to work. It provides entertainment for the non-shopping spouse. You may like to shop, your spouse may like to shop but it’s rare that both like to shop at the same time. One is always looking for something to do. By providing free Wi-Fi and nice, attractive common areas, the person that is not shopping can be entertained.

HHM: The shopping culture seems to have changed. It’s hard to justify paying full price at a clothing store when you know you can get the same thing for much less at an outlet.

ST: It doesn’t matter what your demographic status is. You earned your money and you want to spend it wisely. The outlets are 30 to 50 percent off full price, every day. You know you’re getting the best price. That’s why we’ve been very fortunate to have been successful.

HHM: Tanger Outlets have become somewhat of a destination. We get people here all the time from Savannah, Jacksonville and other larger markets. Do you see that at all of your centers?

ST: Yes. We are a regional shopping destination. We love and value our local shoppers, but we don’t provide a grocery store, a hairdresser or a manicure place. We don’t compete with the local merchants. We bring disposable dollars into the local economy from the outside economy, which is great. It’s a win-win for everybody. That’s why we’ve been able to provide jobs. These are new, well-paying jobs — not replacement jobs. We’re not cannibalizing other businesses and stealing their employees. We’re adding new jobs to the system.

HHM: What does the future hold?

ST: The business model seems to have worked for the past 33 years. Hopefully it will continue to work for a long period of time. We’re excited about the direction we’re headed.