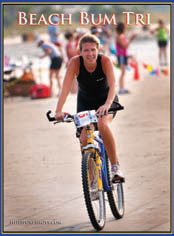 “I’m one of those parents that has a tendency to yell in the stands,” Ritterbeck said. “My wife told me I needed to find something else to do during the games.”

The professional photographer grabbed his camera and headed to the sideline. Rather than just snapping photos of his own son, Ritterbeck followed the action, taking high-quality shots of all players on the field. It didn’t take long for parents to start heckling the former referee heckler for the images he took of their children.

To streamline the process of getting the photos to the parents, Ritterbeck began posting the sports shots to his website.

“It all just sort of grew from there,” Ritterbeck said. “It has really taken off the last six years.”

Being an avid sports fan, Ritterbeck soon expanded his operation to all Hilton Head Island high schools and sports. Today, his site (www.hhisportshots.com) has more than 25,000 photos of local athletes on it.

The site has an overwhelming amount of photos available for print or download. Find sporting events from Hilton Head Christian Academy, Hilton Head Island High School, Hilton Head Prep and recreational events such as golf and 5Ks. The biggest part of his business is large format posters and prints. People also hire him to shoot video or take personal photos of their athlete. He and his wife take all the team photos for HHCA and Hilton Head High.

“I’m just a sports junkie,” Ritterbeck said. “I would rather go to a sports game during the week than sit at home and watch TV. I was at a lot of games and I just started shooting them. That’s what happened.”

“When you get around to all the games and all the sports, you pretty much see every athlete that has come through this island,” Ritterbeck said. “That’s the fun part.”