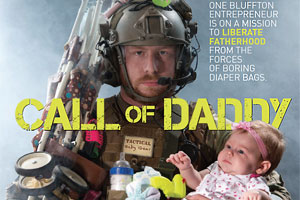 FATHERHOOD IS A MAN'S GAME

ONE BLUFFTON ENTREPRENEUR IS ON A MISSION TO LIBERATE FATHERHOOD FROM THE FORCES OF BORING DIAPER BAGS.

When a knee gets skinned from the friendly fire of an errant skateboard, we fathers are the frontline medics who slap on a Band-Aid and send the little soldier back into battle. When hostilities break out over disputed territories in the sandbox, or when civil unrest threatens the serenity of bedtime, it is we who intervene in the name of peace.

And it’s not just the he-man stuff. Dads are taking a stronger stance in their children’s upbringing these days. A generation ago, no man changed a diaper. Now, you are rightfully shamed if you’re not down there in the trenches, co-parenting and dealing with a baby’s many messy habits. So why are diaper bags still designed as if the wife will be the only one carrying them?

While most guys will silently suffer the frills, ruffl es, and embroidered duckies of the typical diaper bag, Bluffton entrepreneur Bev Brodie saw a chance to do something much cooler. A father to two girls with his partner in business and life, Brandy Bartlett, Brodie is a life-long second amendment devotee and proud gun owner. Obviously, a frilly pink diaper bag poses a pretty serious compromise to a reputation like that.

“When you have two girls, and you’re the ‘tactical guy’ and the ‘gun guy’ and you walk into the gun store with your pink diaper bag, you kind of feel like less of a man,” he said with a laugh. “Right?”

When he combined his drive to be a good dad with his deep interest in gun culture, he wound up creating something completely new to a market full of guys sick of being emasculated by their diaper bags. He created Tactical Baby Gear, a line of diaper bags and accessories that look like they were ripped right out of a SWAT team van.

The “Heavy Doodie” bag, one of their most popular items, marries a typical diaper bag with rows of molle webbing for swapping out tactical pouches, bottle pouches, baby blowout pouches and the top-selling “dump pouch” (which is designed for exactly what you think it’s designed for).

It carries everything a dad needs (a weighty load as any dad will tell you), but the key thing is it just looks cool. Not a frill anywhere. Not a ducky in sight.

Combine the extreme utility with the tactical look available in black, tan and olive drab, and you have a bag that’s customtailored for a large and growing segment of firearm enthusiasts.

There was a time when the term “gun nut” carried heavy connotations of a backwoods militia member stocking up on assault rifles for the apocalypse. But as our national conversation on gun control has evolved, and as some have come to perceive the Second Amendment as being threatened, more and more gun enthusiasts have stepped forward to voice their opinion. And those people have babies just like everyone else.

“As rapidly growing as the gun community is, there are so many people that are into this stuff. It’s unbelievable,” Brodie said. “There’s a huge market for it. I’ve had nothing but positive feedback on that.”

So you have a completely unique product and a growing market segment; two things entrepreneurs dream of. So how do you go about getting the word out? In 2014, you start with a hashtag.

Brodie utilizes the social media site to get the word out, display new product and introduce contests, but he also uses it for market research that yields some interesting results. For example, by searching for his #tacticalbabygear tag, he found that of his Instagram followers (which represents around twothirds of his business), 75 percent of his buyers are women.

Instagram, generally a haven for hipsters looking to share the latest photos of what they had for lunch, may seem like an odd choice for promoting something like Tactical Baby Gear, but Brodie saw the appeal right away. 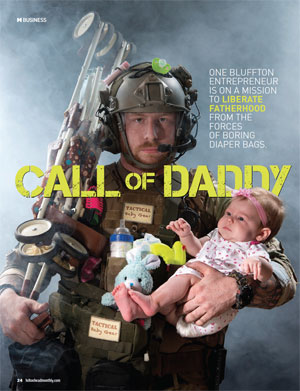 “I knew that was going to be a big one because I have friends who are huge on Instagram; one who has 400,000 followers,” said Brodie.

That Instagram celebrity is Austin Weiss, who has gained fame for his custom bikes for the likes of will.i.am, Lil’ Jon and Carlos Mencia. According to Brodie, Weiss is from Hilton Head and he’s just one of the local experts Brodie has hit up for advice.

“Shane (Gould, of Fuel) has done a lot to help me out,” Brodie said. “He’s given me so much information.”

Brodie has received help from a few of his friends, and now he’s seeking a few thousand more. As he ramps up production and starts to seek out retail channels (and there has been plenty of interest), he has launched a Kickstarter to help fund a new round of orders. Those orders will allow him to build enough volume to get into that retail space.

But for now, he’s continuing to build word-of-hashtag on Instagram and watching his business grow along with his two daughters.