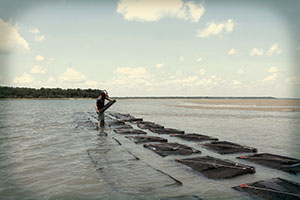 Since Andrew Carmines took over as general manager at Hilton Head Island seafood restaurant Hudson’s on the Docks, he’s been working on cutting out the middle man. He believes in purchasing his products directly from the source, giving the customer the freshest product available.

Carmines has worked tirelessly over the past few years developing relationships with shrimp trawlers, commercial fishing vessels and has also started shedding out soft shell crabs on site at the restaurant. Now he has started the Shell Ring Oyster Company, an oyster farm that has quite the appetite for providing the finest, local single select oysters.

The name, Shell Ring Oyster Company, is a nod to the nomadic Indians that were the first inhabitants of the island. The Indians left behind large rings, believed to be the borders of their small communities. These Indians were indeed the first lovers of raw oysters in the area and Carmines feels that a sense of history is extremely important.

Equally important to Carmines is environmental impact. He believes if you are making a living from what the ocean provides, you should be responsible about the resources you are depleting. “Shell Ring will allow us to avoid purchasing large amounts of the natural resource and will clean the water in the process,” Carmines said.

About three years ago, Carmines was looking at some oysters that were picked in the Port Royal Sound area.

“The size and shape of these oysters were what every restaurant is looking for. I thought that if I could grow these consistently, we would really have something.”

This prompted him to start doing research on oyster farming. Two years later he visited Chincoteague, Va., where he worked with some distant relatives who are very successful in the oyster farming industry.

“It all started out as a ‘what if ’ idea,” he said. “Then, as we researched it more and started to delve deeper into the feasibility of the project, it started to become more realistic.”

Carmines began going through a tedious permitting process with several different government agencies. By Christmas 2013, the project was permitted and ready to begin work.

After some uncertainty on where to find seed oysters, he made contact with Bill Cox on Yonges Island.

Due to a delay on oyster seed from Virginia, Triploid oyster seed was virtually unavailable in the state. Triploid oyster seed is a faster growing variety of seed oyster. Cox’s hatchery on Yonges Island had the ability to produce the seed. He would have to get Triploid males from the Gulf and breed them with diploid females from South Carolina. This had never been done.

“To this day, Bill and I laugh about how many times a week I would call him asking him to get started on the seed,” said Carmines. 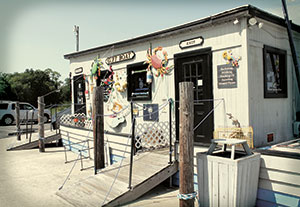 Cox produces millions of clam seed out of his hatchery on Yonges Island. “I was so busy with clam seed, working around the clock to fill orders, and Andrew would call me from the restaurant at midnight and tell me that I had to get started. I thought he was crazy,” said Cox. “I kept telling him that I didn’t even know if it was going to work. He didn’t want to hear that.”

Sure enough, it worked, and Carmines now has about 400,000 seed oysters in Port Royal Sound.

So, how does one grow an oyster you ask?

“We look for male and female oysters that have deep cups, thick shells, a nice opening to slide a knife in, you know, perfect,” said Carmines.

Cox then takes the sperm from the male and the eggs from the female by simulating spring. Sperm fertilizes egg, and bingo. Cox and his son then feed the larvae a buffet of algae that they produce on-site to spur on growth. The oysters must then attach to a piece of oyster shell the size of a grain of sand to start their life.

The hatchery continues to nurse the oysters and when the baby oysters are about the size of your pinkie nail, Carmines introduces them to their new home in Port Royal Sound.

So why are Shell Ring Oysters so exclusive when the wild oyster population in South Carolina is so abundant? Carmines said that it is all about the type of oyster. Everyone knows that the Lowcountry coastline is loaded with oysters. This is part of the problem, according to Carmines. The Lowcountry has a challenging ecosystem for single select oysters. Our tide influence is huge and we have no hard pan bottom. When an oyster reproduces, it has one opportunity to attach itself to a hard object. In our area, that is almost always another oyster. This is why we end up with so many cluster oysters.

The second problem is that most of our oysters spend half their lives out of the water. When an oyster is out of the water, it can’t eat. The end result is that we end up with oysters that have a brittle shell and watery texture. There are nice single oysters in our area, but there are few and those can only be harvested on an unusually low tide.

Carmines is confident that he can grow an oyster to adulthood in 12-16 months, so these freshly grown oysters will be ready for Hudson’s during the late fall. The Carmines are hoping to sell the Shell Ring Oysters nationwide. To get the ball rolling, the oysters are going to be entered in taste contests and trade shows. Although the goal is to grow at least a million oysters, the company is really focusing on quality over quantity.

“It’s really a dream come true,” said Carmines. “When you find something you genuinely enjoy doing and at the same time are able to give back, that’s really what it’s all about. Between the restaurant and this project, I feel like a pretty lucky guy.”