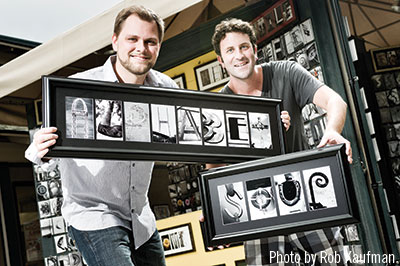 How do you spell success? For Hilton Head Island’s Ryan Martz, it’s as easy as A-B-C.

OK, so there’s a little more to it, like having an uncanny eye for the world around you, turning a photography hobby into a thriving business empire and having fun the whole time you’re doing it. But really, it comes down to 26 simple letters hidden everywhere you look.

Martz has created a thriving business using photographs of landmarks and pretty much any other item that cleverly resemble letters of the alphabet. Customers at their bustling Coligny Plaza kiosk choose 4-by-6 photographs of these letters (and variety is the order of the day — a simple “D” can be anything from a letter drawn in sand, a half-moon transom, a guitar pick, or even the Salty’s Dog’s hat) to spell out a word. The letters are then framed on the spot and, voilá, customers have a unique keepsake.

And as busy as that kiosk in Coligny is, that’s just the foundations of this operation. In 2009, Martz started his business with a website and that single kiosk in Coligny Plaza. Now, he has corporate outlets on River Street in Savannah, and two in St. Augustine, Fla. There are franchise operations at the Navy Pier in Chicago, in Myrtle Beach and Tampa, and a website, bestgiftideaever.com, which Martz calls “the heart and soul of the operation.”

There are also wholesale outlets in Gatlinburg, Tenn., and Asheville, N.C.

So how did Martz come up with such an innovative idea for a business? And how did this young man achieve so much success in just three years?

For the start of this amazing story, let’s travel back to Ohio.

Martz, 29, is originally from the Cleveland area, and, “like everyone else from Ohio, we’d spend summer vacations on Hilton Head,” he said.

He attended The Ohio State University, and after graduating with degrees in political science and communications, he bummed around for a while, ending up in the mortgage/refinance world in Columbus, Ohio.

At the same time, he started considering his future and decided to go fulfill a long-time intention of being a lawyer. So, he started studying for the LSATs and applying at various law schools.

While on a vacation in Ireland in 2009, he was laid off from his job. But, around the same time, he’d been accepted into The University of Akron School of Law. With no job, he figured it was a great time to start his journey on the road to becoming an attorney.

“I loved photography, and taking (alphabet) pictures was something I was doing on the side,” he said. “I always had this idea in the back of my mind as a business.”

During the summer after his first year in law school, he came to Hilton Head and opened the kiosk in Coligny Plaza.

“I figured I’d give it a shot,” he said. “If it failed, it failed. I always had law school to fall back on. I made a lot of mistakes that first year, but I made money!”

Martz did head back to law school, but found he had to make a choice.

“I could either nurture the business or law school. I couldn’t manage both. And I enjoyed making money,” he said with a laugh.

With then-girlfriend and now-wife Jessica cheering him on, he made the permanent move to the island.

The business started taking off. Martz hired New Jersey native Russell Shostak as the manager of operations. Like Martz, he spent summer vacations with his family on Hilton Head.

In the last few years, Martz and Shostak opened the Savannah location with one booth, which has now been converted into the equivalent of seven booths.

“River Street opened the doors for everything,” said Shostak.

In addition to the corporate locations and franchises, they’ve also expanded into selling the product on a wholesale basis, and have opened a warehouse on the north end of Hilton Head. They also have a Christmas kiosk at Oglethorpe Mall in Savannah.

“It’s been kind of a roller coaster,” said Shostak. “We’ve been learning as we go. It’s very exciting. Ryan has just an unbelievable business sense and vision. He’s very forward-thinking.”

Shostak said the business is a natural. “My whole thing is about destinations. When people come to Hilton Head or Savannah or any of our other locations, they want a souvenir. Our biggest draw is for photos from points of interest, like the Salty Dog or the Neptune statue at Harbour Town.”

At the Hilton Head location on a summer afternoon at Coligny Plaza, it’s a rare person who passes the kiosk without stopping and oooh-ing and aaah-ing. The word “cool” is repeated over and over.

So does Shostak look for letters everywhere he goes? “All the time!” he said, laughing. “I’m like, ‘Oh, look at that!’ I really need to give it a rest.”

Martz said he’s past searching for letters everywhere he goes. “I used to, but I would just go crazy now always looking for letters,” he said, adding that he recently hired a staff photographer, in addition to other staff to man the kiosks.

So what advice does Martz have for other young entrepreneurs?

“If you’re going to do something, do it at full speed,” he said. “Don’t freak out. You have to be confident in yourself and in your product.

“For me, it’s also all about my staff. No one is going to love your business more than you. But I want all of us to grow together. I want it to be their baby, too, and we’ll nurture it together.

“We’re great at making mistakes,” he said. “But, we’re even greater at learning from them.”

Visit www.bestgiftideaever.com for order and other information.