If you live on Hilton Head Island — or have ever visited the area — you’ve most likely heard the name Hudson, and it was probably in the same breath as the word “seafood.”

The Hudson family came to Hilton Head more than a century ago and made quite a name for themselves in the seafood industry. Now the fourth generation of Hudsons, Tonya Hudson, is at the helm, with her mother, Barbara Hudson, always nearby to lend a hand. 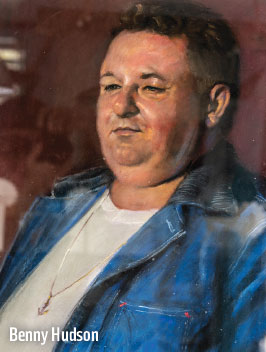 It all began when a farmer named Ransom Hudson brought his family to the island for the summer. The Hudsons believe Ransom lived in either the middle or upstate of South Carolina at the time. Back then, it was common for people who lived inland to spend the summer months on the sea islands to escape the brutal heat.

When Ransom saw the abundance of fish, shrimp and crab on Hilton Head, he decided to go into the seafood business and moved his family to Hilton Head permanently in the 1890s.

“Their background was farming,” Barbara said about her late husband’s ancestors. “And if you think about it, it’s pretty much the same thing that people do in the seafood industry. We have to farm our oyster beds. We have to treat the waters the same way as you would the fields. We have to take care of it; we have to nurture it … and you expect to reap a harvest.”

Ransom’s son Benjamin ran three oyster factories on Hilton Head, and Benjamin’s son Benny ran two factories. The family had 52 acres of oyster grounds, and at one time shucked 250 gallons of oysters each day. Benny also docked 24 shrimp trawlers, operated several of his own trawlers, and alongside his devoted wife, built and ran a seafood restaurant, seafood market and oddly enough, a furniture store. Benny died of a massive heart attack in 1997. 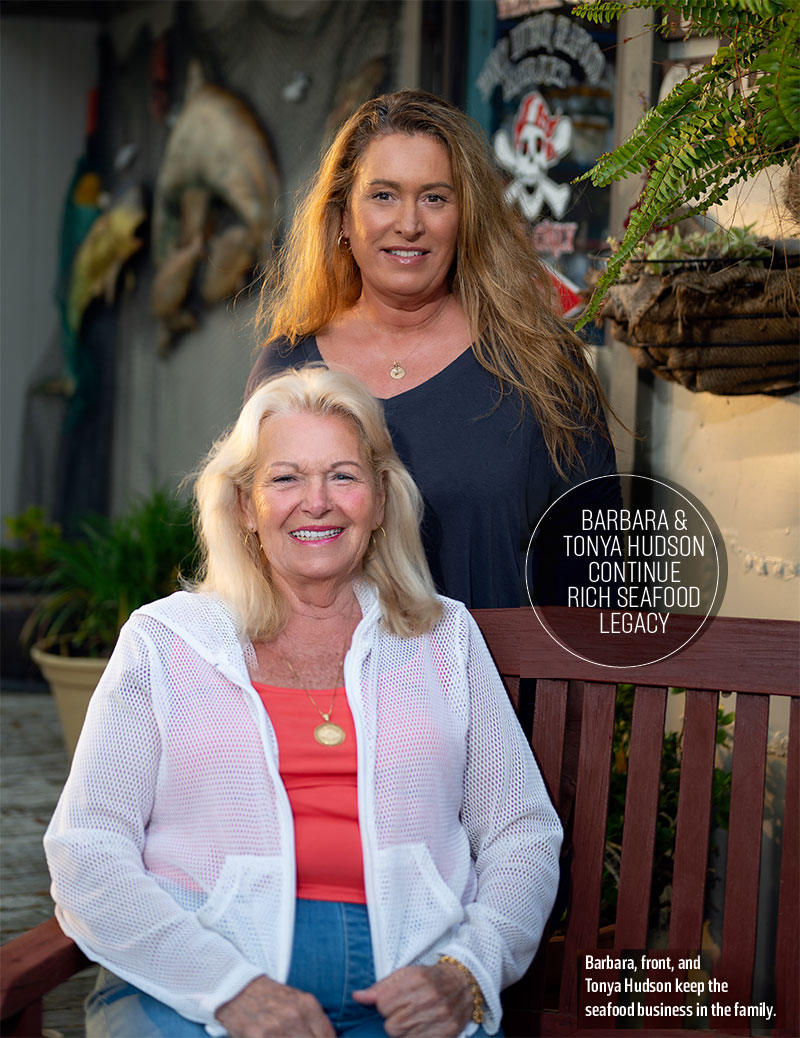 For years, Benny and Barbara sold their freshly caught seafood wholesale right off the docks. When people came to town to buy seafood, he would invite them to stay for dinner. Benny loved to cook and would come up with some delicious recipes.

“It was nothing for me to come home and find 15 or 20 strangers in my house that I didn’t know from Adam,” Barbara said. “That’s how we got into the restaurant business.” 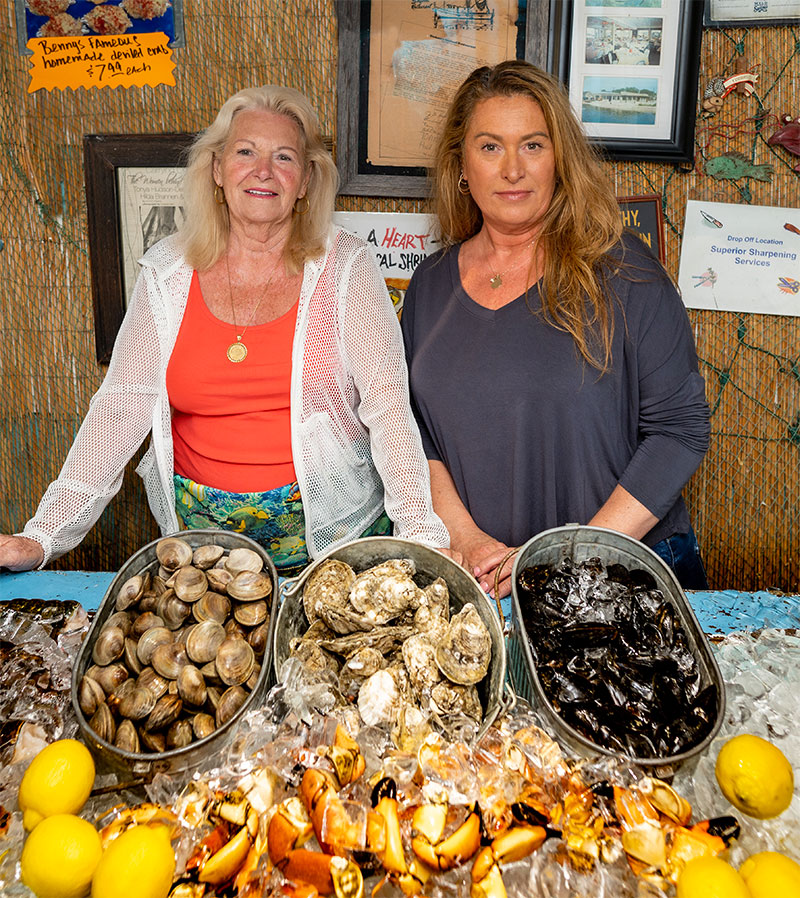 In 1968, Benny and Barbara opened Hudson’s Seafood Restaurant off Squire Pope Road. In 1975, Benny developed some health problems, and the Hudsons sold the restaurant to Brian and Gloria Carmines. Their son Andrew Carmines now runs the restaurant, which was renamed Hudson's Seafood House on the Docks.

In August 1994, the Hudsons opened Benny Hudson Seafood Market, and it has continued to grow ever since. The market has been so popular that customers often line up in the parking lot to get in.

People who live or vacation on Daufuskie Island will load up on as much seafood as they can before getting on the ferry. Several regular Hilton Head visitors make it a priority to stop by the market and fill their empty coolers with seafood on their way back up north. There are also a handful of die-hard customers who pay extra to have seafood shipped to them overnight.

Tonya said for years the market would sell twice as much shrimp as anything else. That changed during the pandemic. People stopped eating out at restaurants for a while and wanted to cook fish at home. More and more people started asking her how to cook fish. She began teaching her employees how to cook different dishes so they could explain to customers how to prepare them at home.

As owner of the seafood market, Tonya is responsible for talking to the fishermen to find out what kind of fish they have each day and relaying that information to the purveyors. She waits on customers. She speaks at events about the importance of buying local seafood rather than imported. She even teaches customers how to shuck oysters and gives them pointers on cooking seafood.

Barbara said Benny taught Tonya to do things the right way or to not do them at all.

He also taught her the value of hard work. When Tonya was old enough to drive, her father liked to play a little trick on her. She would get all dressed up to go out with friends, and he’d stop her on the way out.

“Daddy would be like, ‘Where are you going? You have to peel all this shrimp,’” Tonya said. “So I’m the fastest shrimp peeler ever. He would have a heaping sinkful so I’d have to get dressed all over again.”

Tonya’s speedy shrimp-peeling skills, along with everything else her parents taught her about the seafood industry, have taken her a long way. 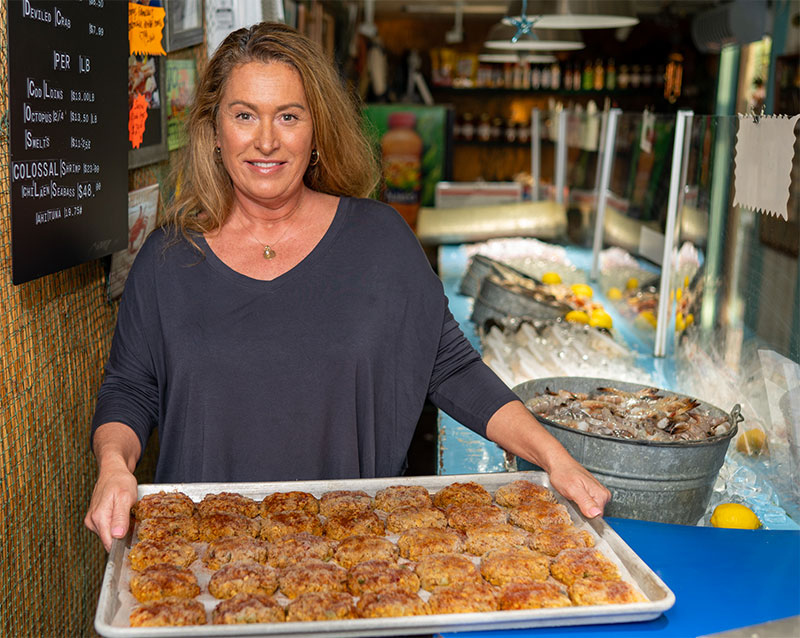 “I tell Tonya all the time, ‘I know he’s in Heaven looking down, thinking this is awesome,’” Barbara said. “He would be so proud of Tonya and where she has taken this business.”

Barbara is now retired, but she has never been busier than she is now as they prepare for the next step in the evolution of the family business. She has been busy meeting with contractors, making phone calls and doing whatever else she can to help her daughter with the business.

The Hudsons plan to move into a larger space within the year. The building that once held the family’s furniture store will soon house the seafood market. They will have four times the space there than they have now.

“I’m super excited about this move,” Barbara said. “I think we’re going to be able to provide so much more, and it’s definitely going to make the customers happy. I’m looking forward to it. It’s the big dream. I think it’s finally going to come to fruition. We’ve been talking about it for years.” 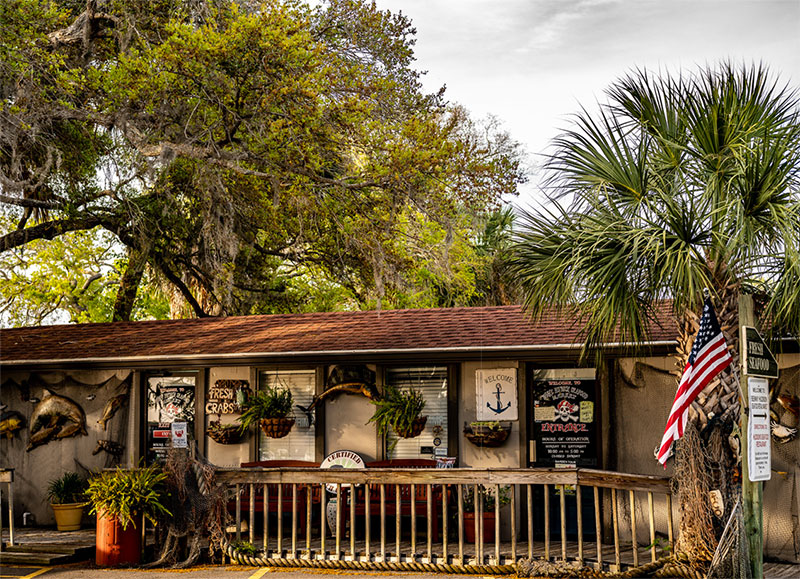 After they move into the renovated building, the Hudsons would like to offer fresh organic produce and more pre-made items, such as Benny’s famous deviled crab. Barbara is also hoping to finish her memoir by then.

Both women hope that Tonya’s 21-year-old daughter, Hannah Desalve, will continue the tradition as the fifth generation of Hudsons providing fresh local seafood in the Lowcountry. Desalve is currently studying fisheries and wildlife management at the University of North Dakota.

“It’s been a great life,” Barbara said. “And I feel so blessed to have the family that I have and the wonderful husband that I adored.”