When a married couple shares the same line of work, and it’s one that revolves around competition, there’s bound to be some tension, and the stakes can be high.

When husband-and-wife golf pros James and Calay Swift had more time to hone their game, a date with the dishes was often on the line. But those days are gone, replaced by new concerns like who is going to get the kids to practice or round up dinner.

“I would say it was competitive a while ago; now it’s more like a pillow fight,” Calay quips.

“Yes, true. Who can hit worse, less?” says James, who insists Calay was the better golfer in their prime, citing her success at James Madison University and a stint playing professionally. 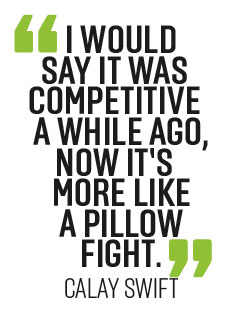 The irony of becoming a golf pro is the better you are the more your game suffers. Time spent on the course or range is replaced with board meetings and desk work, but it’s a life that has served the Swifts well.

After meeting as part of a tight-knit crew of assistant pros in the Charlotte area while James was working at Myers Park Country Club and Calay was uptown at Charlotte Country Club, the Swifts followed the golf business to Pittsburgh when James landed a job at the prestigious Oakmont Golf Club, where Calay grew up; then to San Diego when they were hired as a team at The Santaluz Club; and back to Charlotte for four years before settling on Hilton Head Island.

It’s where they always knew they wanted to wind up. James first visited while en route to Charlotte to attend Queens University and play golf, then came back with Calay and her family, who has been visiting since falling in love with the island while following Calay around the amateur golf circuit.

When James had the opportunity to become the Director of Golf at Belfair Golf Club in Bluffton in 2011, they jumped at the chance. Calay caught on at Colleton River, then landed at Moss Creek six years ago, enticed by a Monday to Friday schedule — a rarity in the golf business and a necessity for a working mom whose husband also works in the industry.

“That was impossible to pass up,” Calay says. “So, at least on the weekends we weren’t juggling sitters and missing sports and all that. It’s hard. It’s a balance. But at least with me having the weekends off, we know that one of us has set days off, and he tries hard to get Sundays. Typically on a Sunday, you’ll find us somewhere near the water, or in the water, or under the water, or paddling on the water.”

Things got a bit easier when James made the move from Belfair to Sea Pines Country Club in January, cutting down on his commute and resulting in a major life change as he shifted from managing Belfair’s two courses to one 18-hole track in Sea Pines.

He also likes that the new gig gives him the opportunity to develop an instructional program and get back to focusing more on the game. He hopes that carries over to the couple’s children. Their 11-year-old son Andrew has taken to the game and has a nice lefty swing, but 16-year-old Delcie is into just about everything else, including crew, lacrosse, and softball.

“I think the best thing in our lives now is going to be actually getting our children involved in the game in some way,” James says.

Whatever the Swifts do, it will happen here, at least until the kids are grown.

“When the kids are out of college, it’s Calay’s turn to become the Director of Golf and everything,” James jokes. “So, she gets to go wherever she wants to go. The Bahamas would be nice.”