The result was a 2014 staff meeting where Gray says he told employees of Atlas Surveying Inc.: “We have built something special here. We respect people and they respect us. Now, let’s blow it up.”

Reflecting on that moment, Gray now says he wasn’t entirely certain how things would change. But he knew the company vibe needed to be more inclusive, collaborative and trusting.

And, above all, the company needed to provide more opportunities for high achievers to shoulder more responsibility and be rewarded.

“Billy said he was thinking about trying to grow the company,” remembers Keith Burns, a company vice-president, co-founder and longtime friend to Gray. “He said if we didn’t create opportunities, we are just training our competition.”

The personnel pivot paid off. Launched in Gray’s garage in 2004 as a “mom-and-pop” operation with one truck and two employees, Atlas Surveying today has more than 100 employees and a footprint that includes operations in the Lowcountry, Savannah, Charleston and Greenville-Spartanburg.

Atlas has played a role in many area projects, including Sun City, Harbour Town, Buckwalter Place, May River High School, the Marine Corps Air Station in Beaufort and the Plant Riverside District in Savannah. 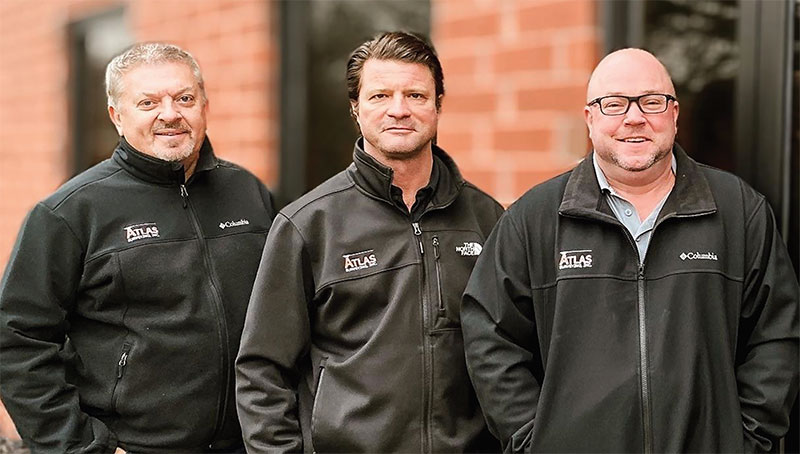 The company’s bright orange trucks seem ever-present, serving an array of customers that include engineering firms, builders, developers, government, farmers and the military.

The company provides a three-step survey process that: 1) measures land for development, 2) designates a construction layout, and 3) confirms that a project was placed properly.

“When it comes to development, we are like the Marines: first to arrive and last to leave,” Gray says.

In addition, veterans are “outstanding” when it comes to handling technical equipment, he says.

You can’t miss the Atlas crews. Their bright orange vehicles — consistent with the orange tape strategically placed on job sites by surveyors — “can be seen by Google Earth,” Gray jokes.

The eye-catching shade, he says, was adapted from a Solo cup when he gave his first order to a paint shop.

A native of Allendale who earned a management degree at Clemson University, Gray, 52, is a longtime Bluffton resident. He was introduced to surveying by a roommate decades ago and learned on the job before completing specialized training and earning state and national certification. 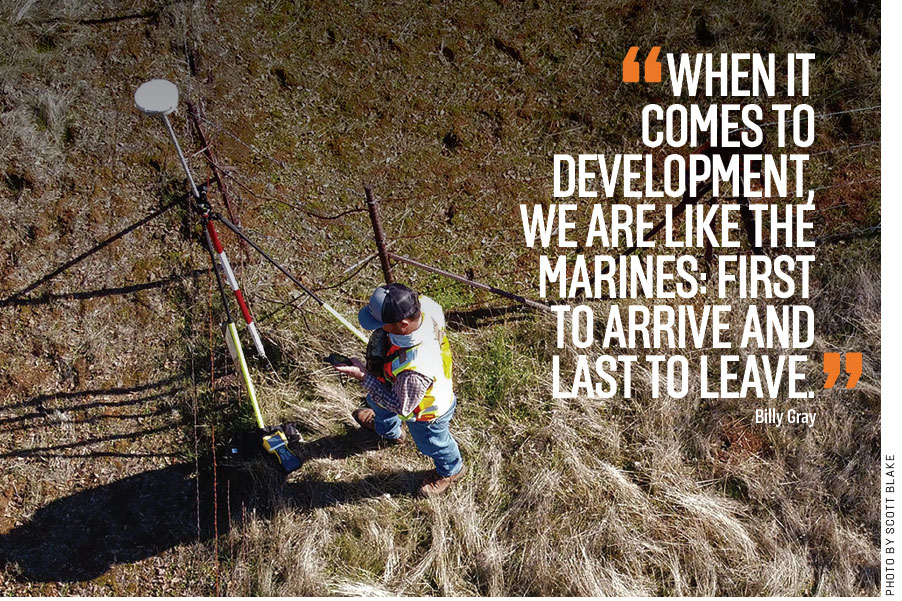 His reverence for the profession is unmistakable:

“Three of the four presidents on Mt. Rushmore were surveyors,” he says, referring to George Washington, Thomas Jefferson and Abraham Lincoln.

Bringing that respect to the job — and the Atlas surveying team – is key to the company’s progress, Gray says. It also helped shape his personal progression “from surveyor to cheerleader for my people.”

“We have really good people,” he explains. “Part of our growth is we were at the right place at the right time. But it’s the people here who put it all together. It’s not your résumé, but your attitude that determines success.”

“We are looking for good character and a desire to grow,” Burns says. “We will teach them to be a strong surveyor.

“We cannot teach responsibility, work ethic and respect … I tell my folks quite often to thank their parents for me when they see them.”

The “magic is to do things the right way and put together the right team,” adds Golde, an engineer and New England transplant.

“The goal is to build trust. People make mistakes. What’s important is that mistakes get addressed quickly, and the learning is shared. If you make yourself vulnerable, if you are willing to own up to mistakes for the benefit of others, you are able to build trust,” he said.