SIGNIFICANT INFUSION OF CAPITAL PUTS COMMUNITY BANK BACK ON TRACK TO EXPAND.

The financial crisis of the late 2000s hit the United States hard — especially small community banks. While big banks were bailed out, roughly 85 percent of all financial institutions that failed during the crisis held less than $1 billion in assets. These are the local banks that help small business grow, and locally many simply vanished.

But CoastalStates Bank not only survived the financial crisis, it thrived. And thanks to a fresh infusion of capital, it’s ready to resume the course it set before the world of banking turned upside down.

“When Randy Dolyniuk founded the bank, and I came along back in 2004, we always had the long-term goal of growing into a statewide franchise,” said executive chairman Jim Macleod. “By being able to raise the additional capital and bring in some new management talent to the firm, after the struggles of the financial crisis we’re now able to go forward with the original plan.”

That capital came in the form of $62.2 million, raised from a combination of current shareholders investing additional funds into the firm as well as additional investors such as Patriot Financial Partners, funds managed by EJF Capital LLC, and GCP Capital Partners.

COASTALSTATES BANK IS STILL FOCUSED ON ITS PRIMARY MISSION: SERVING THE LOWCOUNTRY AS A TRUE COMMUNITY BANK, EVEN AS IT EXPANDS ACROSS THE SOUTHEAST. 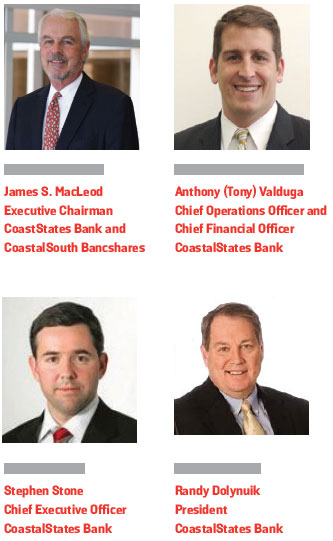 The money will help CoastalStates achieve its financial goals in a multitude of ways. First, it will allow the bank to offer more loans to the Small Business Administration, as well as senior housing and mid-tier homebuilders throughout the Southeast. It also will be able to conduct mergers and acquisitions, plus redeem all of the company’s outstanding series A&B preferred securities originally issued through the U.S. Treasury's Capital Purchase Program.

This new round of capital has also allowed the bank to restructure its executive team. Macleod will now serve as executive chairman for CoastalStates Bank and parent company CoastalSouth Bancshares, while Dolyniuk will assume the role of CoastalStates Bank president. Tony Valduga has been named the chief operations officer and chief financial officer, while Stephen Stone has been added as CEO.

Stone and Valduga both come to the firm from Atlanta, where they had previously been with Freebird, LLC, as well Community & Southern Bank, where Valduga served as CFO and Stone as chief strategy officer.

"I am delighted to be a part of CoastalSouth and CoastalStates Bank," Stone said in a statement, "Along with Tony and the other members of our banking team, we are going to build upon the legacy of outstanding customer service and local leadership that has made CoastalStates Bank the No. 1 community bank on Hilton Head and in Bluffton.  Our strategy includes organic growth through our existing community bank, as well as new lines of business designed to meet the needs of our customers and our communities. In addition, we plan to further expand our franchise through mergers with other community banks that share our values and are as committed as we are to serving our communities."

WE DO IT DIFFERENTLY THAN THE OTHER GUYS DO

CoastalStates Bank is still focused on its primary mission: serving the Lowcountry as a true community bank, even as it expands across the Southeast. Community banking fills an important role in the Lowcountry, serving consumers and small businesses often overlooked by larger financial institutions.

“That’s really important. We have now been put back on really firm financial ground after the problems that all banks suffered during the financial crisis,” Macleod said. “There’s a need for community banks to serve local customers and local businesses. Because we do it differently than the big guys do.”