These days, the winds of change are blowing hard — the trouble is their direction is constantly changing. It is said that lake sailors are far more skilled because they deal constantly with gusting winds, while ocean sailors enjoy the prevailing winds for days at a time. Like sailors, those of us in the business of forecasting economic activity are much more comfortable following trends, and so the rapid change we are now experiencing is driving us crazy.

As we head into 2018, we must keep in mind that our personal financial situations are likely to change substantially. Let’s start by looking at interest rates and how upward pressure, across the interest rate curve, will affect us. Analysts anticipate that the Federal Open Market Committee will continue to raise the federal funds rate in December, and then possibly as many as three to four more times in 2018. We will certainly see increased interest income on our cash savings. The offset to that will be that we will likely see the cost of borrowing go up. Investors should also be wary about being overexposed to the equity markets, as rising interest rates will make fixed-income investing more attractive and draw investable dollars away from stocks. I would be particularly concerned about higher dividend stocks like utilities, as these investments compete directly with bonds.

The next area of concern is how full employment — defined as a 4.1 percent unemployment rate — and the resulting impact on wages will impact inflation.  Remember that the majority of Americans today have very little experience with rising interest rates and any meaningful level of inflation. Labor is becoming a huge problem for companies, particularly in the Lowcountry, as new business and existing employers compete for people in a limited labor pool. Wages will increase, causing more demand for goods and services, and what is known as “wage push” inflation will be off and running. The FOMC has indicated that it would like to see a 2 percent annual inflation rate, and with all this tightness in the labor market, as well as increasing oil and food prices, we just might see prices rising at rates not seen in decades. 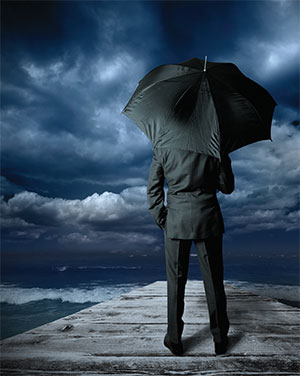 When it comes to tax reform, we must remember that our tax code has been constructed not just to pay for the cost of government, but also to be a tool to implement policy. Let’s start with the subject of corporate taxes, as that issue is far less complicated than individual tax reform. The United States has one of the highest corporate tax rates in the world and, as a result, U.S. corporations are disadvantaged when competing for both customers and capital in a global marketplace. Both Republicans and Democrats in Congress can find ways to support a lower corporate tax rate of, say, 25 percent as long as they can also find a way to make up for that lost revenue without increasing the national debt. If the proposed changes were to lower the corporate tax rate to 25 percent, and reduce the number of corporate tax loopholes, lawmakers would probably work together and pass legislation. Unfortunately, the current proposals are for a 20 percent rate, which many will not support.

As far as individual tax reform is concerned, it will be far more difficult for our elected officials to compromise. While we can all agree that tax simplification is an admirable goal, the complexity of reducing the number of tax rates and the elimination of certain deductions is immense. Further, the unintended consequences of changing the tax code are far-reaching. Under the current proposed legislation, several highly popular deductions would be eliminated or reduced in exchange for a higher standard deduction and fewer and lower marginal tax rates. President Donald Trump has promised this plan will reduce taxes for the middle class and will spur economic growth, which hypothetically would make up for revenue lost due to lower tax rates.

While eliminating the ability for people to deduct state and local taxes on their federal tax return can offset the advantages of a higher standard deduction, it will certainly result in migration from higher-tax states like New York, New Jersey, Wisconsin and Minnesota to lower-tax states like South Carolina, Florida and Texas. The unintended consequence is fewer people paying for government services in higher-tax states and more demand for services in states with lower tax rates.

And, of course, the proposed increase in the standard deduction and the reduction in the level of the mortgage interest deduction may well give way to higher demand for rental housing. The elimination of deductibility for second homes could also cause home prices to drop in markets like Hilton Head Island. Every current tax deduction has a sponsor, however, and the debate will be fierce. Unintended consequences are certain.

Expect 2018 to be a year of change for our national and local economies, and as far as our personal finances go, it is important that we are knowledgeable and prepared to deal with the unexpected.

Elihu Spencer is a local amateur economist with a long business history in global finance. His life work has been centered on understanding credit cycles and their impact on local economies. The information contained in this article has been obtained from sources considered reliable but the accuracy cannot be guaranteed.