If you were in a sunny spot during August’s solar eclipse, you probably watched in awe as the moon stole the sun’s light for a minute. In just an hour, the energy generated by the sun is strong enough to power the needs of the planet for an entire year. And yet solar power makes up only a sliver of our total energy production.

Here in the Lowcountry, postcard-perfect vistas and oak-lined roads suggest a life exempt from modern concerns. But for some homeowners, the financial and environmental benefits of solar power have made high-tech solutions attractive. Because many communities are private, homeowners in Hilton Head Island and Bluffton may have to confront bureaucracy to install environmentally friendly technologies. While the solar industry keeps improving in efficiency and aesthetics, community covenants have been slow to adapt.

A recent report by national research firm Solar Power Rocks ranking states on a “Solar Report Card” — based on criteria ranging from barriers to use to installation to tax incentives — listed South Carolina as 32nd, just behind North Carolina. While South Carolinians face substantial obstacles to installing solar panels, the state’s solar tax credit allows homeowners to deduct 25 percent of the cost of their system for up to 10 years. Industry analysts have calculated that most systems will pay for themselves within seven years and will provide a 16 percent return on investment thereafter. South Carolina also receives more hours of sunlight per day than many other states, so the potential for profit is there. 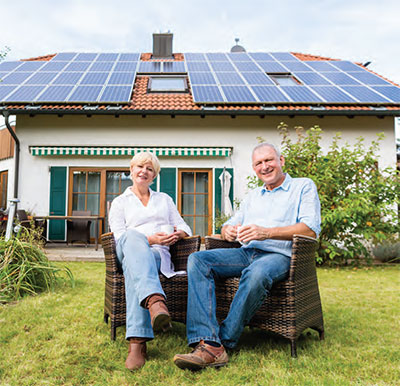 But in the age-old tussle between individual and collective rights, solar power is no exception. In private communities, community aesthetic ordinances are giving some individual homeowners a headache when they try to install solar systems. While some states have implemented laws to override private community ordinances, South Carolina doesn’t offer this protection to homeowners. While some communities have overhauled their policies to adapt to solar, many private neighborhoods have not followed suit.

Many communities prohibit anything on the roof, including satellite dishes and solar panels. Others allow the panels, but rules governing their placement can make actually installing them a challenge. Often, solar panels are prohibited if they are visible from the street. Other communities outlaw the panels if visible from a golf course.

In some communities, rules about solar panels date from the days when the systems were an eyesore. But today, solar technology is more attractive and less obtrusive. Previous bright reflective panels have been replaced by more discreet designs, and today they can be mounted flush against a home’s roof.

Owners of solar companies can make recommendations on panel placement, but it’s up to the homeowner to get permission from the community board.

These companies often meet with local community boards to educate them about solar power and to help clients fill out applications for permission and submit the design sketches that many architectural review boards require. But sometimes, despite their best efforts, communities still say no to solar.

It took Bluffton retiree Mary Watson seven months to jump through all the hoops her community required to place solar panels on her roof — a process she said felt arbitrary.

“It’s kind of economic discrimination because (the community board) picks and chooses who they want to approve. Who are they to tell me that, in the same community, one person can save money on their power bill and another can’t?” she asked.

But perseverance paid off. In addition to feeling good about conserving energy and helping the environment, Watson said her electricity bill has shrunk by 30-35 percent since she installed solar panels. She has learned to run her big appliances like water and dryer during peak sun hours. 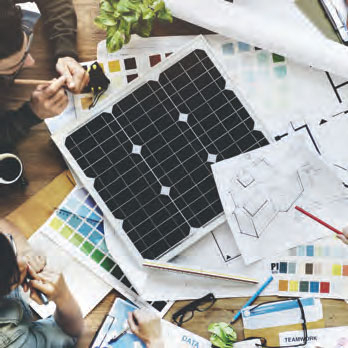 When the meter runs backwards, at that moment her solar panels are producing more electricity than she’s using. New technology also allows homeowners to monitor their energy usage on a smart phone, allowing them to time their energy usage coincide with peak sunlight hours.

Meanwhile, the future of solar design continues to evolve. Futuristic car company Tesla is one of the businesses leading the way. Also a leader in the solar industry, Tesla is developing solar panels disguised as roof tiles (also good for the Lowcountry because they will withstand three times the wind speed of ordinary roof tiles). Other new developments are freeing solar power from rooftops. At the cutting edge are windows embedded with tiny solar cells capable of generating electricity from sunlight and artificial sources alike.

Local governments are also getting into the game. To cut costs, some businesses and homeowners are banding together to buy solar panels in bulk from installation companies. The city of Savannah offers this opportunity to residents through a municipal initiative, Solarize Savannah. Solarize is a national program supported by the U.S. Department of Energy that helps local governments buy solar supplies in bulk to encourage their use among residents.

Those who manage private communities in the Lowcountry also have noticed an uptick in interest in solar. They believe the requests are motivated by a combination of financial and environmental concerns.

“Solar is the big new thing that we think we’re going to be seeing a lot more of,” said Heather Houck, community manager at Association Services Inc. on Hilton Head Island.

Community managers know that updating neighborhood covenants is a lengthy process. It doesn’t start until interested residents attend their community’s annual meeting or a board meeting and making a motion to consider a change. The board then comes up with sample language to amend the covenants, and a designated number of residents have to vote to approve the change. Often, the services of an attorney are needed. Interested homeowners might feel like they need to channel the tenacity of the sun to achieve this goal, but even in the “Slowcountry” solar is here to stay.