AS SOON AS HURRICANE IRMA STARTED HEADING TOWARD THE LOWCOUNTRY, THE CREW AT HILTON HEAD BOATHOUSE STARTED PREPARING FOR THE WORST.

During his regular operating season, the boathouse stacks boats on on top of the other inside its massive dry stack storage barn, all the way up to the ceiling. But during named storms, the boathouse also shelters the boats of the North End Charter Fleet and other customers who keep their boats in the water and don’t have trailers or other ways to get the vessels out during dangerous weather.

“At an in-water marina, no matter how well you tie your boat, it’s how well the other guy tied his,” said Grant Kaple, manager of the Hilton Head Boathouse. “Once a boat gets loose, it gets ugly.” 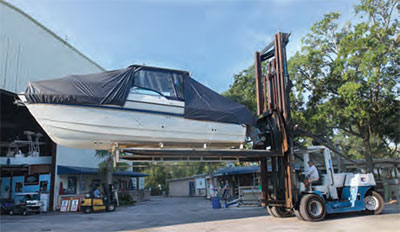 The boathouse started preparing for the storm on Sept. 5, when S.C. Gov. Henry McMaster declared a state of emergency. Their goal was to wrap up preparations by the evening of Sept. 7, well in advance of the storm. Storing the boats, which range from 18 feet to 37 feet long, involves using a 100,000-pound forklift to hoist the vessels out of the water and transport them to the dry stack facility. This isn’t your son’s toy truck.

The boathouse’s hurricane storage fee of $500 a year guarantees that customers’ boats are removed from the water and secured indoors in the case of a named storm like Irma or Matthew. Out of that annual fee, $200 can be applied to repair services at the boathouse. And no matter how many named storms make their way toward the Lowcountry each year, the boathouse staff will always be there for their customers.

“I keep my boat in the water at the Long Cove dock year-round,” said customer Ray Stickel, owner of a 30-foot-long Grady-White. Stickel has subscribed to the boathouse’s hurricane protection plan each year since 2004 or 2005. “I haven’t used the hurricane protection very many years — we used it last year, we’re using it this year, and we used it one other time. But it’s peace of mind.” 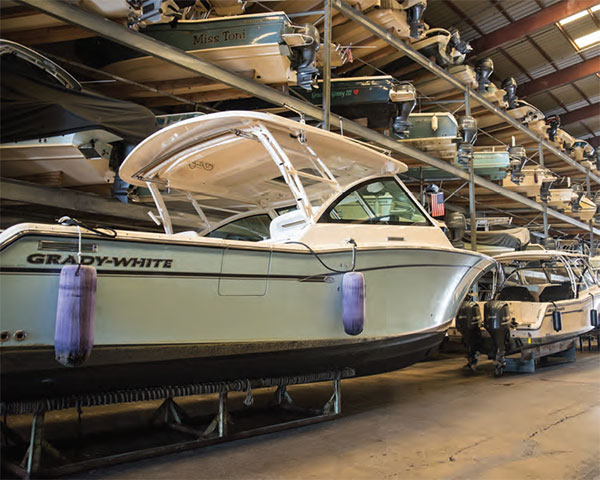 “It’s best to get your boat out of the water” when a storm approaches, he said.

And riding out the storm at harbor isn’t as easy as just leaving your boat in the water, the boathouse’s expert say. You’ll need special equipment and skills, and even then there is the risk of damage to docks, other boats and property.

“It’s been kind of brutal this year,” said Kaple, who had to turn customers away at the boathouse as Irma approached. “I want to help people, but there’s no room at the inn.” 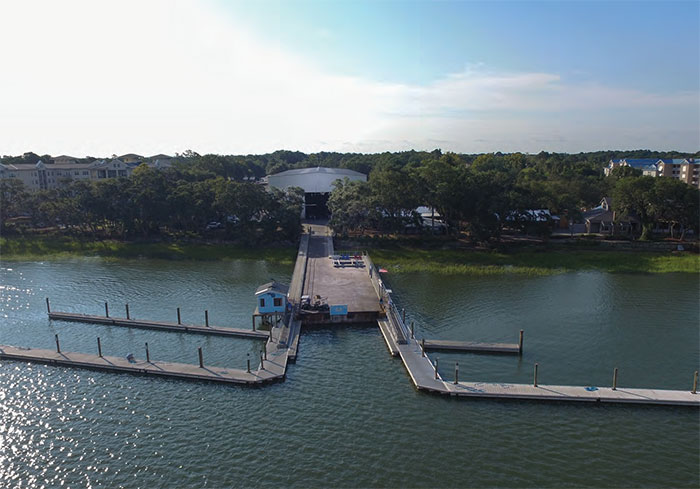 Most of Hilton Head Boathouse’s space in its 280-boat dry stack is devoted to regular customers. The hurricane storage is a mobile rack that’s used just for boats in the boathouse’s hurricane protection program. Currently, the capacity is 10 boats. In the past, the boathouse had been able to accommodate up to 20, but Kaple said the area’s growing population of boaters has put a strain on storage demands — and the boathouse has had to limit the size of its hurricane program because the effort required to pick up, transport and store the boats. To make sure your boat is in the best hands during a hurricane, Kaple said, boat owners must start planning far ahead of the storm.