BECOME YOUR OWN BOSS

Have you ever dreamed of being an entrepreneur … of having your own successful business? Controlling your own destiny? Being beholden to no one other than yourself in your work?

Many of us have had this dream.

Lots of have stepped forth to achieve it and found bitter disappointment for one reason or another.  There are many others, however, who have in fact experienced the satisfying fulfillment of creating a new enterprise, seeing it blossom and experiencing the financial and personal rewards that follow.

This month Hilton Head Monthly is starting a series about entrepreneurs in our readership area.

Some of these entrepreneurs will be experiencing success right now.  Others have successfully retired to Hilton Head Island and Bluffton after achievements elsewhere.

The purpose of this new series is twofold:

BE PASSIONATE ABOUT WHAT YOU DO

Kay Stanley and her husband Curt Seymour, owners of Spartina  449, were already highly successful entrepreneurs when they  moved from Kansas City, Missouri  to "try out" retirement on  Daufuskie Island in April, 2009 with their Goldendoodle dog, Buddy. 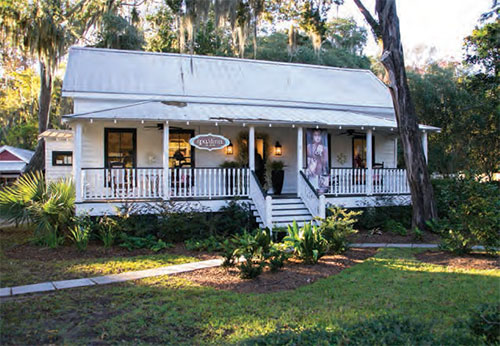 Stanley and Seymour had just sold their nationally recognized, award-winning scrapbook and crafts business, K&Company, which had originally been launched as a side business out of their Missouri home in order to make a bit of extra money. That tiny enterprise in just 10 years of operation was sold to a venture capital firm for what has been reported to be several tens of millions of dollars. It later became a branded product line of Wilton Industries & Brands, the largest private enterprise in the USA specializing in innovative products for the home including Martha Stewart Crafts and the American Girl  brand.

The young couple seemed ready to kick back and relax for a while. But, while Kay had fallen in love with her new coastal South Carolina environment, she just wasn't ready to embrace retirement. She soon began planning for her next business adventure that needed to be in a different  field because of  their "non-compete agreement." 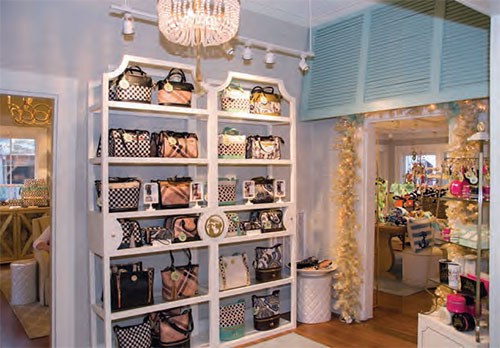 This time around Stanley, whose career had started as a graphics designer with an advertising agency, wanted to apply her passion and talent for design to the field of fashion -- in particular women's accessories, from handbags and wallets to scarves and jewelry.  Now, five years later, the Hilton Head Island based enterprise has been recognized by Inc. Magazine as one of America's fastest growing private companies .

Stanley says more than 1,800 retail outlets across the nation and in the Caribbean now carry Spartina products.  This is in addition to a growing revenue stream from the internet and  two nearby brick-and-mortar stores (one in Old Town Bluffton and the other at the new Tanger Outlet on I-95 in Pooler near the Savannah International Airport.

Named for the native marsh grass and the street address of their first home on Daufuskie Island,  Spartina 449 draws the inspiration for its products from the nearby sea islands.  Products were originally aimed exclusively toward the female market,  but are now being extended into golf because of Seymour's love for the game. 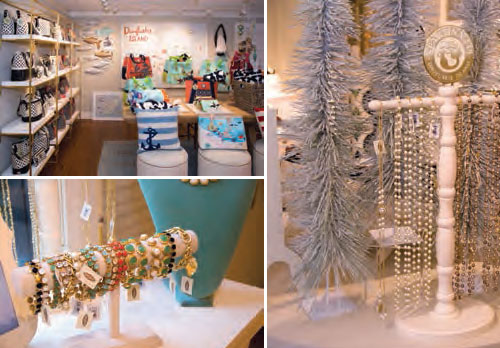 Spartina  449 has leveraged PR opportunities, and  has been touted as a "trendsetter" in a wide variety of national publications from People Stylewatch, to Oprah's O Magazine, Glamour Magazine and Women's Day.  To help celebrate the area's culture and rich history which influence its designs, the company donates a portion of all proceeds to the Daufuskie Island Historical Foundation.

As entrepreneurs, Stanley and Seymour exhibit several of the most common entrepreneurial  traits as noted on Entrepreneur.com a website for "wannabe" entrepreneurs.  These include:  nimble thinking;  willingness to take big risks; learning on the fly; a sincere willingness to listen to others, but always deciding for themselves.

Stanley  tells an intriguing story which perfectly addresses successful entrepreneurs being nimble and willing to take a big risk.

It began on one of her earliest visits to a gift trade show, where she was trying to find retail buyers for her first product -- a customizable picture frame -- but with limited success.  As the day moved on, Stanley noticed a few booths away people were lined up in front of a vendor with a scrapbook product. Checking it out, she quickly realized she could create something better than what was being sold, and raced home to tell her husband.  The couple soon mortgaged their house and poured their entire savings into purchasing $100,000 worth of inventory to get the new business fully capitalized.

Fortunately, timing was perfect. The scrapbooking phenomenon boomed between 2001 (after Nine-Eleven) and 2005, and their K&Company became an industry darling. Hobby Lobby, Michaels, Target and Walmart came calling, and QVC  became a customer after Stanley sent them a blind letter with some samples.  A buyer from QVC took a shine to the designs, called back and placed a $1 million order.  A few months later 77,000 of the company's scrapbook kits were sold on QVC in one day.

Stanley and Seymour were pouring their life into the business -- working round the clock to meet demand, but they were also savvy enough to sense a market saturation and the beginning of a decline. They sold at the industry's peak.

Today's Spartina 449 seems on somewhat of a similar but smarter path. Stanley says her personal pace is also more leisurely. Her best advice to new entrepreneurs today are threefold: (1) Be passionate about what you do; (2) Know your market and always keep your eyes open for new opportunities; (3) Have sufficient capital and get a good accountant so you can focus on what you do best.