RUDOLPH TAKES A DAY OFF AS SANTA SOARS ONTO HILTON HEAD VIA CHOPPER.

Kids scanning the skies around Hilton Head Island for the approach of Santa Claus got to see something a little different this year.

Rather than approaching by sleigh, dragged along by his nine trusty reindeer and propelled by Christmas spirit, Santa opted for a slightly more modern mode of transportation. Namely, a helicopter.

The Nov. 27 flyby from St. Nick, complete with touchdown at Coligny Beach’s famed “Boneyard,” was accomplished with a little help from Hilton Head Heli Tours and arranged by Coligny as a huge statement that the holi - day season has arrived. Santa’s visit coincided with Coligny’s “Local Black Friday” outdoor market, which celebrated a local alternative to the big-box Black Friday with deals from Coligny merchants and a per - formance by Cranford Hollow.

But Santa’s real reason for visiting in such dramatic fash - ion was to officially usher in the month-long Christmas at Coligny event during a land - mark year in the history of Hilton Head’s downtown.

“It was just such an exciting way to kick off Christmas at Coligny,” said Coligny’s Leslie Richardson. “We always like to give people something to talk about at the start of the holidays, but with this being Coligny’s 60 th anniversary, we knew we had to really pull out all the stops.” 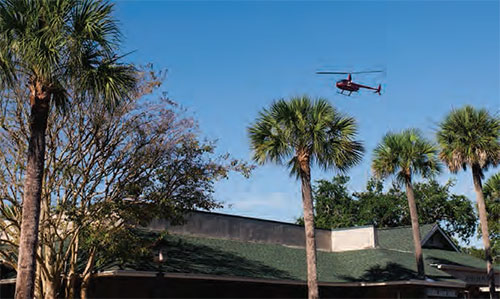 In keeping with the spirit of saluting Coligny’s 60 years, the Richardsons drew inspiration from Hilton Head’s history in coming up with Santa’s memo - rable entrance.

“We were reminded of an old Hilton Head tradition from around 30 years ago, where John Curry used to do a few laps around the Sea Pines Circle in a helicopter, waving to kids, before handing out candy at the circle as the tree was lit for the season,” said Richardson. “Everyone who was around back then remembers that so fondly, it just seemed like the perfect time to revive that tradition.”

And so, with this salute to the past, Coligny has created an entirely new Christmas tra - dition, one that serves as a fiting start to an exciting month at Hilton Head’s downtown.

“We have gigantic plans for this year’s Christmas at Coligny; I think we’re really going to surprise people,” enthused Richardson. “Every day in December leading up to Christmas we’re doing a giveaway. There’s going to be something completely new and unique every day.”

The giveaways culminate with the grand prize, awarded on Dec. 25, of $1,000 in cash to one lucky Coligny shopper.

“This is an immensely impor - tant year for us, and between the giveaways, the month of events and of course Santa making his grand entrance by helicopter, we’re making sure this year we’re doing Coligny’s 60th Christmas like never before,” said JR Richardson, Coligny Plaza’s Owner and husband of Leslie.

For the crowds of kids, the adults who got to feel like a kid, and the reindeer who were granted a day off, the spectacle of Santa arriving by helicopter was something memories are made of. And what better way to kick off a historic holiday season for Hilton Head’s downtown than with an old tradition made new again.