The April issue of Hilton Head Monthly is dedicated to the RBC Heritage Presented by Boeing. But I want to take this opportunity to talk about a related heritage — our national economy — and how the next six months may set the tone of that heritage for the next 10 years.

For the 27th year in a row, I attended the Mid-Winter Housing Finance Conference in Beaver Creek, Colorado. The conference is a gathering of housing industry leaders, bankers, government officials and a few congressmen who are interested in housing policy.

The most significant topic was how the economy — and the housing market in particular — was going to handle the first interest rate increases in almost nine years. During those years, the Federal Open Market Committee (FOMC) has held the Fed Funds rate (the overnight rate at which one lender can lend its funds at the Federal Reserve to another lender) at approximately zero. The FOMC has also engaged in a massive Quantitative Easing (QE) Program, which has kept midterm and long-term U.S. interest rates at unprecedented low levels. Now, QE is ending and the FOMC is signaling a series of one quarter of 1 percent increases in the Fed Funds rate.

How will that affect people on Hilton Head Island and in Bluffton? 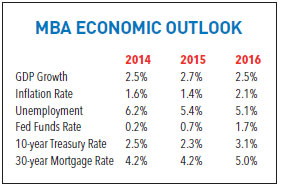 As we look at the MBA forecast, I am taken by the fact that the world’s most dynamic economy continued to plug along at a very sluggish rate. Yes, we have returned to traditional levels of “full employment,” but gross domestic product, inflation and interest rates remain unimpressively low some six years into a recovery. Some of that reflects the slow growth of other world economies, and particularly the impact of the continuing European recession.

Real GDP is driven by many factors, such as business spending, residential construction, exports and federal government spending. But the most significant factor is personal consumption expenditures. Because of reduced federal government spending (yep, it’s true) and the strengthening of the dollar against the euro and many other currencies (making U.S. goods and services more expensive), U.S. real GDP growth has been negatively impacted. Consumers and businesses generally respond poorly to reports of slow growth by spending less, so things begin to cascade downward from there.

The last confusing piece of the U. S. economic equation is what is happening with inflation. As we all know, the cost of gasoline has dropped significantly, while the cost of food has slightly risen. The overall U.S. “headline inflation” annual rate is 1.6 percent, and the typical consumer has more money in his pocket even though his wages may remain flat.

So what does this all mean for us today and for the foreseeable future?

As explained above, QE is ending and the FOMC is signaling a series of one quarter of 1 percent increases in Fed Funds rates. As a result, I think it is safe to say that the cost of borrowing will increase but remain historically low for a number of years. The corollary is that yields on fixed-income assets, such as government and private corporate bonds, will also remain low. But because mortgage interest rates have been so low for so long, even relatively small increases in mortgage rates will help keep the supply of resale residential properties low. As a result of increasing demand, home prices will begin to rise more sharply. Think about it: Some homeowners who have locked in a 30-year fixed-rate mortgage loan at 3.5 percent will be reluctant to put their homes on the market and take out a new mortgage on a new home for 5 percent. A 1.5 percent increase may not be much in historical rate terms, but it’s still 43 percent more than the 3.5 percent rate.

Meanwhile, back at the beach: With the cost of gasoline just north of $2 a gallon, Hilton Head and surrounding areas should be able to anticipate a spectacular summer tourist season that will be kicked off by the RBC Heritage. Let’s face it. Tourism is the backbone of our local economy. So welcome those visitors and let the few of us lucky enough to live here full time enjoy the benefits when most of them leave in September.

Elihu Spencer is an amateur economist with a long business history in global finance. His life’s work has been centered on understanding credit cycles and their impact on local economies. The information contained in this article has been obtained from sources considered reliable, but the accuracy cannot be guaranteed.