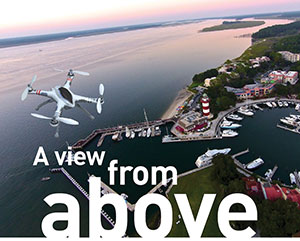 Think back to the last concert or festival you attended. Did you spot a remote-control helicopter hovering above the treetops? Did you wave and smile? There’s a good chance that you were on camera being filmed by someone embracing the new trend of drone photography. The new technology is an inexpensive way to capture stunning aerial images with a bird’s-eye view.

“Advances in modern electronics and digital technology allow the device to be lightweight, portable and relatively easy to use,” says professional photographer Jack Davis.

Like many photographers, Davis is experiencing the explosion in the digital photography revolution firsthand and has experimented with drone photography as an option for his clients.

Seeing him operate the device makes it seem simple enough. He places the small helicopter in the middle of a field, flips a few switches on his handheld control panel and within a few minutes, the drone is up and flying.

During a test run, he launched his remote-control helicopter from the first tee of a golf course and recorded video, showing obstacles and strategic landing zones and approach points.

“The technology offers limitless possibilities for flyovers and virtual tours,” he said.

Research shows the one-of-a-kind video is being embraced by everyone from Realtors to sportscasters and film production companies. 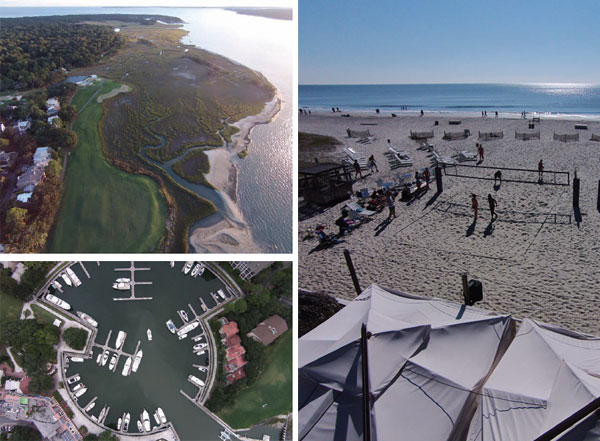 “Not so fast,” warns Sean Barth. “This is primitive technology that is completely self regulating right now. Yes, we are on the cutting edge of developing some really cool stuff, but it’s important to remember safety first.”

Barth, an associate professor of hospitality management at the University of South Carolina, has partnered with computer engineer Juan Jordan with the goal of making the technology safer and even more user-friendly.

“We’re using global positioning satellites and writing algorithms that allow us to engage with our students on a whole new level,” Barth said. “What better way to teach hard-core math and science skills than engaging students in an activity that is technology based and is cutting edge?”

Barth is quick to remind would-be drone pilots that while on the surface everything looks cool, safety has got to be the first and last thing that you think about every time you fly.

“Right now, it can be like the Wild West out here,” said one local photographer who preferred to remain nameless. “I’ve been told that potential damages aren’t necessary covered under general liability insurance, and the technology is so new that no one really knows what’s going to happen if and when accidents occur.”

Officials from the Federal Aviation Administration say the technology is so new that regulations regarding training and licensing will not be made public until fall 2015. Until then, no one really knows who would be liable if one of the remote control drones were to crash and cause serious injury.

Meanwhile, Barth isn’t taking any chances. “I’m studying for my commercial pilot license so that I can become an expert in operating the drones and am working with my students and a business partner to develop algorithms that will make the new technology even safer,” he said.

Many advocates of the new technology view drones as the next step in the evolution of the art of photography, giving photographers the ability to capture nearly any event in a new and interesting way. Proponents warn of liability, risk, security and privacy concerns.

Other uses could be as varied as the Hilton Head Island-Bluffton Chamber of Commerce conducting a flyover down Pope Avenue to get an accurate attendance count at the annual St. Patrick’s Day Parade, or for use during the annual Hilton Head Island Wine & Food Festival, where hospitality tax revenue is based on population figures.

“With this technology, we would have real-time numbers with pictures to back it up,” Barth said. “Want to know how many people are on Coligny Beach on Fourth of July weekend? Just send up a drone.”

“I foresee a day when thermal imaging units on drones can be programmed to perform a coordinated grid search that the Coast Guard can use for search and rescue to save lives,” Barth said. “I just feel privileged to know that we’re helping to shape the future.”