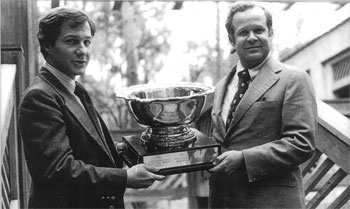 The Lowcountry has come to symbolize relaxed luxury to the rest of the country, but 55 years ago, Hilton Head Island was an insignificant, nearly impossible-to-reach outpost known mostly for war history many wanted to forget.

The shift in perception has come from a half-century-long series of carefully crafted marketing strategies from the moment Charles Fraser set forth to make Hilton Head Island a destination for tourists and retirees.

“It has been nothing but a marketing story from day one,” said island marketing guru Tom Gardo, one of many who worked with Fraser to promote what was then Sea Pines Plantation to the world.

In the beginning Fraser knew marketing would be key to everything he was looking to accomplish, but had virtually no budget. “The golf courses were built to market the real estate,” Gardo said. “Then everyone wanted to be on the beach. Charles created breezeways in the forest to draw people away from the beach. He just needed the right hook.”

That’s where David Pearson stepped in. A young writer for the UPI News Service in Atlanta, Pearson visited 1959, met Fraser and saw an opportunity. A beautiful marriage was born. “Charlie was a dreamer. He just had a bunch of Yale Law School guys that knew nothing about resorts, but boy, he sold me quick,” Pearson said. “I’m a history major from Emory, so I didn’t know much either. But we were ready to take on the world.”

The first issue: how to get people to Hilton Head Island in the first place from U.S. 17. 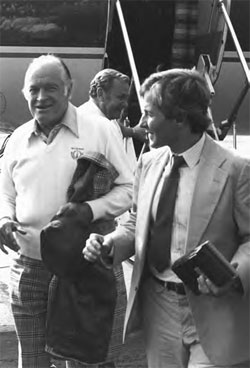 “In those early days we were making creative directional signs, pointing motorists to Beaufort and Hilton Head and finally Sea Pines,” Pearson said. “It was a public service but it promoted Sea Pines. We paid folks to use their land and put the signs on every big cross-section out to U.S. 17.”

Pearson’s original big idea was to promote a gigantic alligator, Albert, who was a local legend. Pearson set up a photo using a pretty model with a nine-iron along the 18th fairway of the brand new Ocean Course. He then held a long cane pole with a huge steak, trying to entice Albert into the camera’s frame. “Just as Albert grabbed for the meat, I jerked the steak out of the frame and yelled, ‘Now!” to the photographer,” Pearson said. “It was perfect. The girl in Bermuda shorts is looking at the ball, Albert looks like he’s about to gobble it. So you have the girl in the background, Albert in the foreground and the tagline became, ‘Visit a Championship Golf Course with World’s Most Dangerous Natural Hazard.’ The story went around the world on the wire service. People ate it up . . . all the way to ‘Stars and Stripes’ in Japan.”

The UPI photo drew enormous attention, as did another soon after with Albert and Fraser, which ended up as a full page in the ‘Saturday Evening Post’ – with a circulation of over 5 million at the time. “We somehow got Albert out of the lagoon and Charlie was just fearless. He just started walking next to Albert on the fairway. It was classic,” Pearson recalled.

Next, Fraser wanted to draw an upscale crowd to his fresh, oceanfront 56-room Hilton Head Inn, so Pearson targeted publications like the Wall Street Journal. However, with a miniscule ad budget, he only had room for a tiny one inch ad.

“It read, ‘Atlantic Oceanfront hotel, $13 a night, $6.50 per person.’ And it apparently got the job done,” Gardo said. “The snowbirds started pulling off Highway 17 on their way to Florida. The word was spreading.”

During this time Fraser and Pearson traded Sea Pines lots with a top-notch video company and brought their story to New York City magazine executives, thanks to some introductions from an advertising friend with Curtis Publishing. The ploy worked.  National Geographic and Smithsonian Magazine wrote stories about the resort’s revolutionary land planning – things so simple as access to the beach without having to cross a road were breakthrough ideas in the early 1960s. Soon after Sports Illustrated did a feature article on Fraser and his exotic South Carolina resort. It didn’t hurt that SI also took Swimsuit Issue shots on the island. 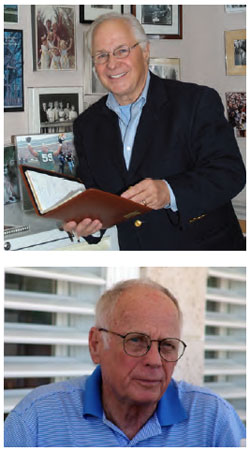 As more people started to arrive, Fraser built more golf courses and started to see big real estate sales returns from his investment, thanks to an eventful island trip from a pair of golf legends.

“Jim Chaffin, who was the head of real estate marketing, told me about how a fledgling golf architect Pete Dye came for a visit with Jack Nicklaus and the two were convinced the island would be perfect for a breathtaking golf course and possibly a PGA Tour stop,” Gardo said. “They were able to complete the course just in time for a late November 1969 date. Arnold Palmer’s victory in that first tourney, his first in more than 14 months, received enormous attention in the sports world, and was cited heavily two weeks later when the Associated Press named Palmer “Athlete of the Decade”.

The brand new HarbourTown Golf Links was also showered with praise for its remarkable design – described by Sports Illustrated as “just about the best new course that anyone has built in ages.”  Indeed, a star was born and a major TV contract with CBS was landed.

Fraser quickly realized television was a giant medium that could expand the Hilton Head Island brand exponentially. He made sure that HarbourTown’s iconic “logo lighthouse” would be strategically placed to capture TV cameras and highlight all of Sea Pines selling points – golf, the ocean, boating and the lifestyle. Following the first Heritage event on TV, Sea Pines got more inquiries in two days than they’d received in the entire year before, Chaffin recalls.

“In those days other places, weren’t marketing to niche audiences, let alone combining niches in one location,” Gardo said. “Charles saw that tennis and bicycles were going to be the next big thing, so he combined them with golf.”

Pearson had moved on by the late 1960s and others such as Chaffin, John Gettys Smith, Tommy Baysden and Tim Doughtie kept the marketing momentum moving for Sea Pines.  Sports event marketing became a draw during those years, following up on the success of The Heritage.  It was a time when tennis was taking off thanks to icons such as Rod Laver and Billy Jean King – both of whom put their names to local tennis facilities at Palmetto Dunes and Shipyard Plantation.

Simultaneously Fraser made the decision to hire a young touring pro named Stan Smith right out of college, and Sea Pines built a tennis stadium to attract professional events including the new Family Circle Cup Women’s Championship, and a special made-for-TV exhibition -- the World Invitational Tennis Classic – which drew a large international following with world class players like Evonne Goolagong, Ilie Nastase, Bjorn Borg and Chris Evert. It put Hilton Head Island on the map as one of the best places for tennis in the world.

But gasoline shortages and economic hard times caused by escalating high interest rates were beginning to negatively impact the island shortly after Gardo arrived in 1973 from New York City as a Vietnam vet-turned American Airlines PR exec. “ I was hooked with one trip” he admits. “I was an Army brat, a vagabond, but when I got here, I knew it’s the one place I wanted to be,” Gardo said. “I figured I could make a good living selling the Hilton Head dream.”  At the time there was a resident population of 3,500 on the island.

One of Gardo’s first tasks was energizing more visitors and potential homebuyers for Sea Pines and Hilton Head Plantation. Ultimately, he and Doughtie helped craft what would become known as “The Ohio Strategy”.

Nowadays, many on the island joke that Hilton Head is actually part of southern Ohio. But, that was no accident. “It was all about target marketing, Gardo said. “We saw that a big percentage of vacationers from Pittsburgh west to Ohio and into Michigan were looking for quality beaches that were easily accessible on the Interstate road systems. Hilton Head Island was right there waiting,” Gardo said. “So we started doing lots of ads in Cincinnati, Columbus, Cleveland, Toledo, Pittsburgh and Detroit. We promised a multi-purpose vacation lifestyle and families started coming in droves during the summer.”

Gardo also focused on demographic and geo-targeting, zoning in on cities that had large upper middle management populations. “Our vacationers would go back to their country clubs and office buildings and talk us up,” Gardo said. “Word of mouth reinforced the credibility of our advertising.”

There was always substance behind the sell, innovations that became nationally recognized. Fraser and Chaffin were among the first in the country to embrace the idea of timeshare vacation ownership, opening up four Sea Pines HarbourTown units to the concept in 1974.

“Timesharing really saved our island economy. It was so foreign back then, but timeshares brought people back year after year during the off-season which kept local restaurants and shops open year round.” Gardo said. “Other resort areas that were hotel-only-based, they really suffered.”

THE ARRIVAL OF SUN CITY

Gardo’s firm in the early 1990’s was also called on to introduce the Arizona-based Del Webb Corporation’s first Sun City on the East Coast. “Our research showed that Del Webb the man had name recognition in the northeast because he had been an owner of the New York Yankees. Sun Cities in Arizona had become popularized along with age-restricted communities. Our research then discovered that the brand recognition of Hilton Head was stronger and more positive than South Carolina, so we went with the name Del Webb’s Sun City Hilton Head,” Gardo said. “It wasn’t a popular decision among the locals, but it worked.”

Again the target audience was I-95 travelers. Billboards were plastered up and down the interstate from the North Carolina border to Jacksonville. They said: ‘Del Webb’s Sun City Hilton Head, Exit 8.’ And they exited in droves as Sun City has become an economic engine of the Lowcountry region.

Gardo, who has helped market more than a dozen top-level Lowcountry real estate developments as well as the Hilton Head CVB, currently sees Hilton Head Island at a marketing crossroads. He believes culture is a key to long-term sustainable growth much the same way he’s seen destinations like Charleston and Vail, Colo., grow.

“Spoleto helped explode Charleston, and in Vail, which is similar in size to Hilton Head they have terrific performing arts which has augmented their ski season,” Gardo said. “That’s why I’m pushing for an indoor-outdoor entertainment venue, something that attracts top performers year round. I truly believe investing in culture and the performing arts can help spark a sustainable marketing fuure. I love this place, so I’m going to do whatever I can to be part of making that next wave happen.”