Working in a sweltering, fast-paced Hilton Head restaurant kitchen, 13 hours a day, six days a week, isn’t what most of us would consider a dream job. The demands are grueling and the pay is nominal.

But for Juan, the work is steady and it allows him to support his growing family here, as well as his parents and siblings back home. 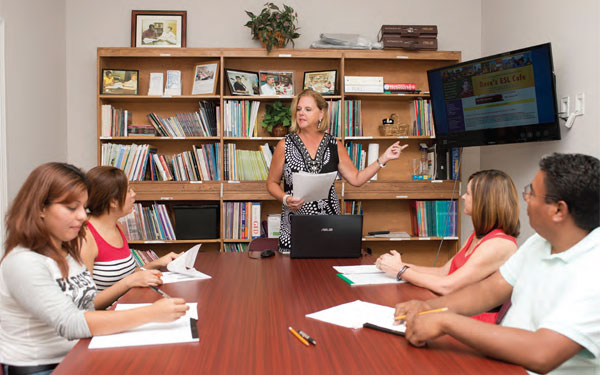 Juan, an immigrant from Mexico, settled in the Lowcountry 10 years ago. He’s quiet, smart and well-mannered. Despite his lack of free time, he met and married a beautiful girl. They started a family and moved to Jasper County, where rent is more affordable on a minimum-wage salary, even though Juan’s commute to Hilton Head takes longer.

Juan doesn’t mind working so hard right now, but he doesn’t want to do it forever. He knows that in order to get ahead, he needs to further his education. However, like many immigrants working long or irregular hours, finding a GED program that fits his work schedule was a challenge.

He contacted The Literacy Center to explain his situation: His time was very limited, but his desire to learn was very strong. He spoke with Mike Powers, program manager of The Literacy Center’s Hilton Head Learning Center, who could sense Juan’s motivation. Powers made arrangements to personally come in early to tutor Juan one-on-one, two mornings a week.

Since March, Juan has made his daily 35-mile trek from Jasper County to Hilton Head a little earlier than normal two days a week. He meets with Powers before he starts his arduous workday. For an hour and a half, Powers and Juan work on high school math and language arts. Then Juan leaves to spend the next 13 hours ensuring both locals and visitors enjoy the local cuisine.

Juan is just one of about 600 students who passed through the doors of The Literacy Center last year. As Beaufort County’s only nonprofit organization focused on improving adult literacy, The Literacy Center’s goal is to equip adults with the reading, writing, math and speaking skills they need to build self-sufficiency and success at home, at work and in our community.

Some students, like Juan, speak English fluently and want to further their U.S. educations. Others want to learn English because they understand that to become productive, contributing members of our community, they must learn the native tongue.

Jean Heyduck, executive director of The Literacy Center, said when the organization started 40 years ago, its focus was basic literacy instruction – teaching reading and writing to native South Carolinians who had suffered the effects of an inferior, segregated school system.

“However, we still serve quite a few students who need basic literacy instruction,” Heyduck said. “Some of them read at the low elementary school level, and we work with them on a one-on-one basis. Others, like Juan, are working toward their GED. We also offer pre-GED classes for adults who aren’t academically prepared to enroll in high school-level classes.”

Heyduck realizes that the issue of adult literacy probably isn’t on everyone’s radar.  “But it should be,” she says, “because it impacts the entire community. People who read, write and speak English are better equipped employees and more involved in civic activities. They’re more likely to get involved in their children’s education, which has a positive, long-term impact on our overall quality of life.”

Heyduck notes that a child’s success in school is overwhelmingly influenced by the educational level of their parents, particularly the mother.

“Where there’s a mother who doesn’t read or can’t speak English, you’ll generally find a child who starts school behind peers and struggles to catch up.”

For many immigrant parents who want a better life for their children, being able to talk with teachers and help with homework is their impetus for enrolling in English classes.

“We ask each student to tell us their goals,” said Heyduck. “For many – mothers in particular — it’s to learn English so they can better communicate with the schools. You certainly have to applaud that!”